They creep so subtly under the radar that it’s easy to miss them. Like invisible elves bustling about, fixing up properties and green spaces in your rural villages, building and maintaining huts and trails in your national parks, organising cultural projects in your community spaces, building playgrounds in your housing estates, and picking up litter on your beaches. Each division spends two weeks at a time on duty, living together and working long days, in all sorts of weather and on various missions. So who are these people? Truth is they aren’t fairies, most of them aren't Icelandic, and what’s more they do it all for free.

Who are we talking about? Time to introduce SEEDS, a non-profit organisation headed by Columbian Oscar-Mauricio Uscategui, which was set up in 2005 in order to host foreign volunteers on social and environmental projects in Iceland, and also organise a place for Icelanders in similar projects abroad.

But why do people come from all over the world to work on a range of social and environmental projects in Iceland? There’s no financial incentive, in fact volunteers have to pay a small fee to cover the cost of the projects they work on.

“Some of our volunteers come because they always had a dream to visit Iceland, some come to meet others and just try something new, others because they’re extremely concerned about the global environment and Iceland’s place in it,” SEEDS coordinator Anna Lúðvíksdóttir tells me. The organisation has hosted over 2.000 volunteers since it started workcamps in 2006, 800 of those volunteers in 2010 alone. The number of workcamps and projects the organisation runs has grown from thirteen to eighty in just four years. Proof that getting your hands dirty, seeing the country and living with total strangers for two weeks has growing appeal.

At the organisation’s recent conference on the environment, guest of honour and award winning journalist-slash-environmentalist Ómar Ragnarsson paid homage to the organisation for it's vital grassroots environmental work, referring to them as "Iceland’s silent army" and as "warriors for the cause". Award winning writer and director Andri Snær Magnason who also spoke at the conference said "I only heard about SEEDS when they contacted me about the conference. I'm amazed at the work that’s been going on all this time under the radar.”

One way in which they are tackling this is by bringing local youths together with international volunteers, so they can judge for themselves the benefits that volunteering can bring. “Some of our projects, particularly those linked with youth centres, require volunteers to come and mix with local Icelanders. To begin with, there can be resistance on the part of local kids and teenagers, they wonder what these people are doing here and it takes time to open up, but the walls always come down in the end.” Anna goes on to say that for Icelanders living in small or isolated communities in particular, this is often an amazing experience.

INTERNING CAN PAY OFF!

Another area of potential interest to Icelanders are the internships that the organisation provides for young people. SEEDS provides intern opportunities both in their office and in the field for up to a year, which, according to Anna, have helped many young people develop valuable organisational, administrative and leadership skills. "We are constantly hosting people in our office as interns, giving them the opportunity to learn new skills. We have links
with many universities abroad, and working with SEEDScan be a great way to find out what you are really interested in and widen your horizons.” She adds that “volunteering can offer people a chance to develop skills and capacities that can lead back into full time employment, as well as providing a gateway into a new sector of employment".

Another major focus, and challenge, is encouraging local communities to maintain the projects which SEEDS starts in their areas. "Hosts in our communities engage completely with our volunteers and it always causes excitement and curiosity in the communities where we work. But as soon as our workcamp is finished, many projects are not kept up.”

While the reality of Icelanders adopting the culture of volunteerism on a wider level will take time to achieve, SEEDS has noticed micro level shifts among smaller communities. “We’re beginning to have some success with our coastal projects in that communities are beginning to see that it’s in their best interests to keep their beaches clean after realising the huge difference our projects have made. We’ve also had really positive response to our environmental education programmes, such as recycling programmes, with young children".
Andri Snær sums it up in a story told at the SEEDS conference last week. "As a child playing on the beach I didn’t see the plastics, the old computers, furniture as rubbish. It was my playground and was just what a beach looked like. I wasn't educated. In fact if someone had come and cleaned away all my playthings I would've been really pissed off. But when I saw a beach without all these washed-up plastics, I realised that’s what it should look like." 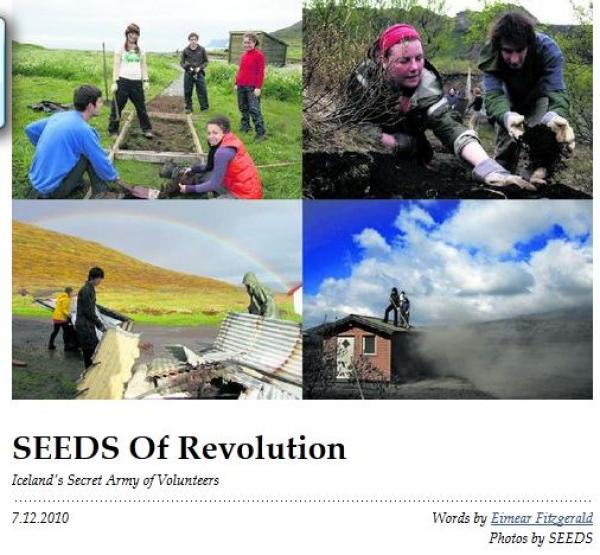