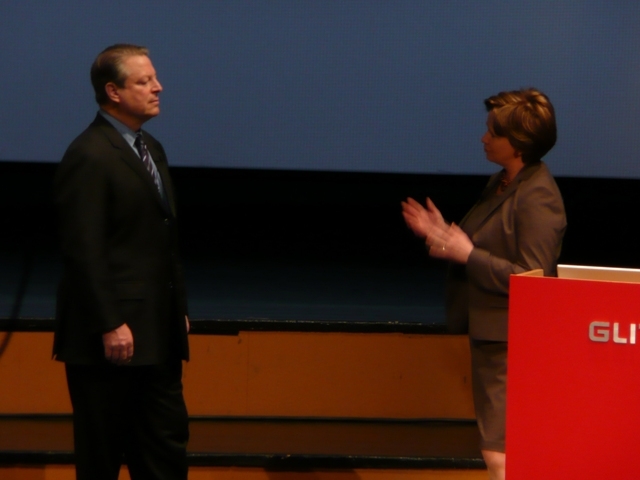 Earlier today, 4 members of SEEDS attended a lecture given by Al Gore, Nobel Peace Prize winner and former Vice-President of the United States ("former next president of the US" as he introduced himself).

The main issues discussed during his short visit to Iceland were related to the human impact on Climate change and the possible future scenarios. Chiara Davico, Juste Cimermanaite, Christophe Joset and Oscar-Mauricio Uscategui from SEEDS Iceland, had the privilege to attend the lecture and be part of a selected group of individuals and organisations that participated.

Mr. Gore is the author of An Inconvenient Truth, a best-selling book on the threat of and solutions to global warming, and the subject of the movie of the same title, which has already become one of the top documentary films in history. In 2007, An Inconvenient Truth was awarded two Academy Awards for Best Documentary Feature and Best Original Song.

Mr. Gore also introduced and promoted his new campaign WE, which is a project of The Alliance for Climate Protection -- a nonprofit, nonpartisan effort founded by him. Its ultimate aim is to halt global warming; specifically educating people in the US and around the world that the climate crisis is both urgent and solvable.

Great to listen in person to someone who managed to reinforce our convictions !

To learn more about the movie An Inconvenient Truth go to http://www.climatecrisis.net/

For more information on The We Campaign visit http://www.wecansolveit.org