Beauty and the Beast Exhibition by SEEDS at Gallery Tukt
18.10.2007 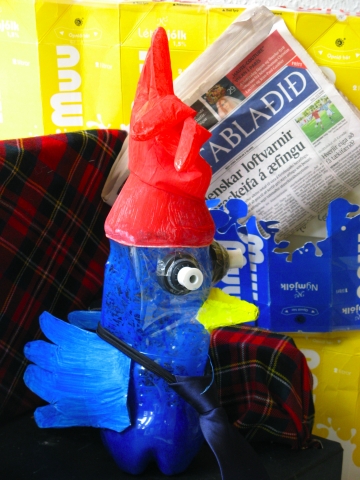 Humans can create beautiful things. But they can also act like beasts. Humans are like the Roman god of gates and doors, Janus, who had two different faces looking in opposite directions.

Even on Iceland - with its mystical landscape covered with glaciers and lava fields - there is no escape from our dark face. Cars drive uselessly around and emit CO2, villagers dig their waste into the earth near the coastline, fishermen throw their empty Tetrapacks and plastic cups into the ocean... But we can fight the beast inside of us and resist pointlessly driving around in our vehicles, try to recycle as much waste as possible, collect garbage that lies on our coastlines. And we all can even be creative while doing so.

Beauty and the Beast was an exhibition that tried to do this. Beside other cultural and environmental tasks, SEEDS’ volunteers cleaned the coastline around Iceland during this summer. Later they used the garbage around them for artistic materials. The exhibition that was placed in Hitt Husid during two weeks in late October tried to inspire visitors and tell how international volunteers contributed to Iceland during this summer.

Vikings made of Viking beer cans, a chicken made of a rubber glove and of a Coke bottle, a Viking ship made from old carton boxes, a theatre stage with actors made out of tetrapacks... And many photos on the wall and in two photoalbums...That was what visitors could see in the exhibitions that SEEDS long term volunteers prepared after their workcamp season ended.

And what else are they doing in during the cold and rainy days in Reykjavík? Beside the daily work in the University Library, there were also some unusual events. A tasty spicy dinner in the Indian Mango restaurant; a competitive bowling evening and a evening trip to the Maríuhellir cave in the Heidmörk national reserve on the outskirts of Reykjavík. And, of course, there were the bittersweet “good bye” nights spent together while the first of our group started to leave back to their home countries...