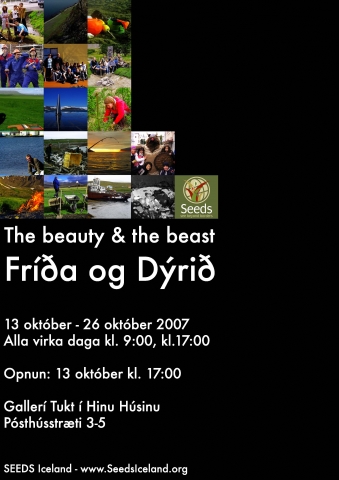 Reykjavík, October 8. During the past 6 months, more than 300 international volunteers from 31 different countries came to Iceland to join SEEDS activities and support diverse types of projects, ranging from environmental and nature-protection to cultural, festivals and sports gatherings.

Together with local communities and Icelandic associations, a total of 24 projects, lasting for 2 weeks at the time and with sizes between 8 and 28 participants, took place in every corner of the Icelandic map, from Sandgerði and Krísuvík to Kópasker and Raufarhöfn; from the Drangajökull and Hornstrandir areas to Þórsmörk and Sólheimar, from Reykjavík and Viðey to Þórshöfn and the Langanes Peninsula, including more locations as Akranes, the Bláfjöll mountain range, Dalvík, Hafnarfjörður, Patreksfjörður, Suðureyri and Tálknafjörður.

Next Saturday, October 14, we will see a great international evening and a exhibition opening with a difference! Lead by SEEDS long term volunteers, we will put on display the entries for "the Beauty and the Beast" competition, a competition for groups of volunteers throughout Europe to show that waste can be re-used (and be beautiful).

The artwork produced by the camps will be presented at a reception on Saturday October 13th at 17:00 in the Gallerí Tukt at Hitt Húsið, which will be opened by SEEDS volunteers and members. Snacks and drinks will be served and the reception will feature a performance by the international volunteers. The reception is open to the public.

The artwork will find a new home at the UNESCO headquarters in Paris. What used to be local garbage will become international art -alongside artworks from similar projects.

The project is a part of UNESCO's Decade of Education for Sustainable Development (www.unesco.org). The project is organised by SEEDS (www.seedsiceland.org), which cooperates with CCIVS, the Coordinating Committee for International Voluntary Service at UNESCO

Supporting the biggest festivals, cultural and sports gatherings in Iceland as the Reykjavík Arts Festival and the Skjaldborg documentary film festival in Patreksfjörður in May; the Viking Festival in Hafnarfjörður and the International Children's Games in June; the Irish Days in Akranes and the Hiking & Culture Festival in Patreksfjörður in July; the Culture Night, Gay Pride, Marathon, the Nordic REYFI festival in Reykjavík, the Viðey summer festival and the Great Fish Day in Dalvík in August; and the RIFF - Reykjavík International Film Festival in September and October; shows the strong participation, contribution and geographic presence of our volunteers in Iceland during this 2007.

This is part of SEEDS' work through volunteer exchanges to preserve the environment, promote cultural activities in Iceland and create peace and mutual understanding at a global scale.