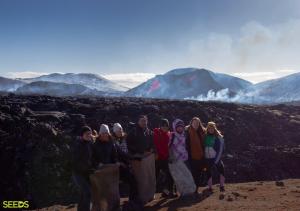 On March 30 eight SEEDS long-term volunteers from seven countries picked up trash at the volcano sites at Geldingadalur.

Since the Geldingadalsgos eruption on 19 March, thousands of people have hiked there to see the active volcano and unfortunately some did not leave just their footprints behind. In addition to cigarette butts, snus mouth tobacco bags, cans and chewing gum, we picked up the remains of rubber crampons and spikes from the hikers as well as clothing that people lost, such as gloves, mittens, hats and scarves.


It was impressive to admire the active volcano and experience the lava field. Scientists believe that the magma comes from a depth of 15-20 km. What determines the length of an eruption is how much magma has accumulated beneath the surface. As it has not erupted in about 6,000 years, there could be a great deal of magma beneath the surface, and this eruption may be with us for a considerable amount of time.


Let's all be mindful, take care of our nature and take home everything that we bring with us.
Thanks to our volunteers and the support of the local authorities and other associations!