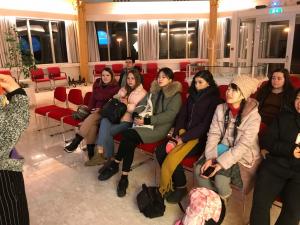 We’ve started the dark morning with an environmental class about how Iceland uses its natural resources (volcanoes and water) to produce renewable energy: geothermal (30%) and hydroelectrical power (70%). The former is mainly used to heat up the housing system in the Reykjavík area, where 2/3 of the population lives.

Following this, we have seen breathtaking landscapes in Þingvellir National Park, where the North American and Eurasian tectonic plates meet! Also, this is the place where the first national assembly was founded, in 930. Back in these times laws were quite strick for incestuous relationships and fornication. Men would be beheaded and women drowned... Thank god we were born 10 centuries later!