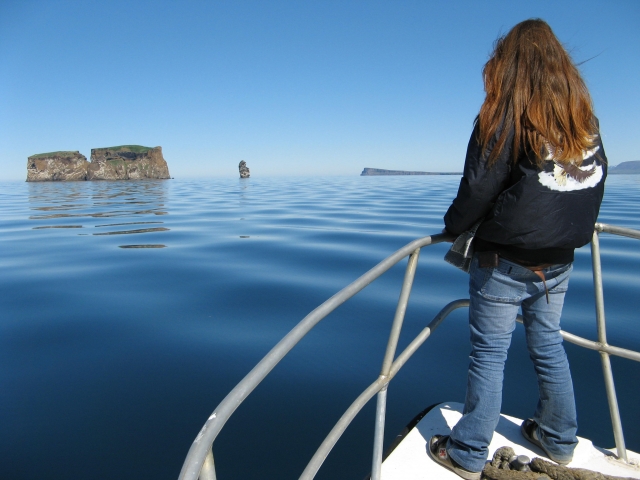 The SEEDS team of Vikings have moved from Hafnarfjörður to Sauðárkrókur, as the Viking Festival moves to the North of Iceland for few days.

Around 180 Viking from all over the world, including SEEDS volunteers, moved to the town of Sauðárkrókur to have the market and events around it for few days in a countryside location in the Skagafjörður district.

The Skagafjörður district is one of Iceland's most prosperous agricultural regions, with widespread dairy and sheep farming in addition to the horse breeding for which the region is famed. Sauðárkrókur has a population of about 3,000 people and in the whole district there are around 4800 inhabitants. It is the second-largest town on the north coast of the country.

The Vikings have the chance to visit Drangey, one of the three islands in the fjord: Málmey, Drangey and Lundey. Drangey or Drang Isle, with its steep sea cliffs, towers majestically in the midst of Skagafjörður fjord. The island is the remnant of a 700,000 year old volcano, mostly made of volcanic ruff, forming a massive rock fortress.

An old legend says that two night-prowling giants, a man and a woman, were traversing the fjord with their cow when they were surprised by the bright rays of daybreak. As a result of exposure to daylight, all three were turned into stone. Drangey represents the cow and Kerling (supposedly the female giant) is to the south of it. Karl (the male giant) was to the north of the island, but he disappeared long ago.

The bird life in Drangey is varied and lively, but the most common are diving birds: the guillemot, auk and puffin. The guillemot nests in the cliffs, while the auk mostly prefers deep cracks underneath the cliffs. The puffin, on the other hand, digs holes in the edge of the cliffs.

On the district, please visit http://www.skagafjordur.is/

On the Viking Festival, http://www.fjorukrain.is