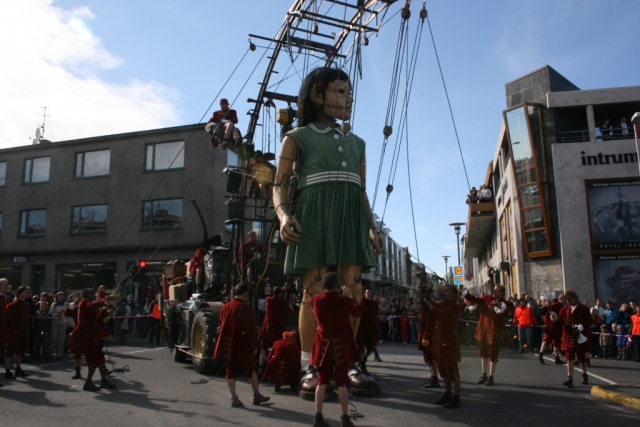 The French street theater company Royal de Luxe is performing during the closing of the French festival "Pourquoi pas? Franskt vor á Islandi", which takes place from the 22nd of February to the 12th of May 2007.

SEEDS' volunteers have been working during the last days hand on hand with the group's crew and are involved in the shows and performances during this weekend in the Icelandic capital! Royal de Luxe is an extraordinary European street theatre company, renowned all over the world. The director Jean Luc Courcoult founded the company in 1979, and they have performed around the globe ever since.

In the past dozen years, they have created a series of spectacular shows involving giant figures as big as 11 or 12 metres high. Shows are simple – the animal or giant arrives in town and lives its life, going about its business for a few days. Extraordinary interactions take place between passers-by and the performance; residents become enchanted with the activities of these miraculous beings and begin to follow their every move. By the end of the performance, huge crowds gather daily to watch the latest episode in the life of the visiting creature.

The shows also mark the beginning of the Reykjavik Arts Festival -Listahátíð í Reykjavík- which has been held biannually since 1970 and annually from 2004. The Festival is one of the oldest and most respected arts festivals in Northern Europe.

To see pictures of the events, please visit our galleries section. For details on: