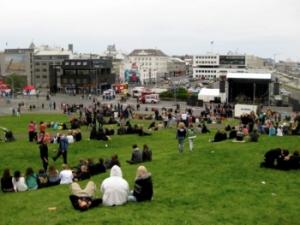 The Annual music festival Við Djúpið was held this summer, as well as in previous years, in the West Fjord's capital Ísafjörður.

The festival hosted a team of seven SEEDS volunteers around the summer solstice. In Ísafjörður music has been part of daily life for a long time. The Ísafjörður Music School was the main venue of the festival. Beside concerts, the festival held master classes with musicians from abroad as well as from Iceland. Volunteers of the festival worked and lived in a very cultural atmosphere for a week.

They were involved in the preparation tasks and also worked on the concerts and helped with the master classes. The experience was rewarding as volunteers had the opportunity to attend concerts and after parties with the festival guests and participants. Few people who volunteered for the festival had musical background. For many of them it was educational to experience a new field by working in it. Life in the international team was colourful and joyful. The team took many hikes by the waterfalls nearby and enjoyed the spectacular bright nights in the gorgeous fjord of the small town.