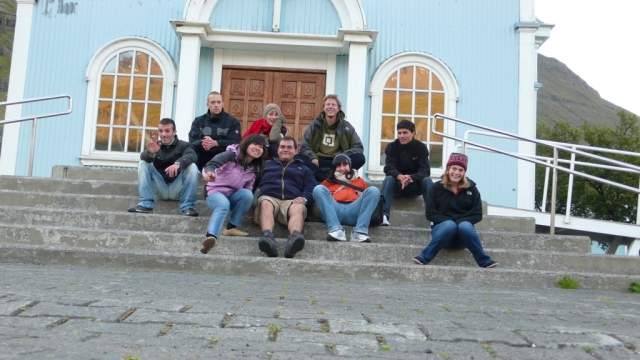 The workcamp took place in Skálanes peninsula 26 km from the town of Seyðisfjörður in the Eastfjords region of Iceland.

The area is very isolated and remote, reachable only by a 4X4 car able to cross three rivers, or by a hiking trail with footbridges! But the location is far, as much as it is extremely beautiful! Skálanes is a private nature and heritage conservation centre within a 1250 hectare nature reserve, whose aim is to create a place where the Icelandic environment and cultural history can be researched and interpreted at the same time as being a model for sustainable tourism.

The accommodation is a restored Icelandic farmhouse set in the middle of the natural reserve. The landscape around offered us a magic and relaxing atmosphere: snow capped mountains, vast sea cliffs with sea birds colonies, a secluded beach, flower meadows all bounded by the sea, waterfalls and geological formations.

We were 7 volunteers from France, Germany, Hungary, Japan, Spain, UK, along with our Czech camp leader and our Italian Environmental messenger.

The accommodation also hosted a group of 6 students from an English University engaged to study, research and exchange information about the nature reserve. These students were studying various tree-planting methods and developing a landscape scale plan for the control/removal of the Nootka lupine growth, an introduced species intended to combat soil erosion, but which is causing a loss of biodiversity within the reserve due to its voracious growth.

The main work was planting supplementary trees following an ambitious plan of reforesting 111 hectares of the reserve, with the aim to accelerate the process of natural regeneration and encourage the remaining trees to expand into unbroken woodland. Another main work was the construction of a traditional Icelandic turf wall. Other secondary works took place during the workcamp, such as cleaning the closest two beaches, building a bigger composter for the accommodation, construction of a stone wall near the cliffs and maintenance of the built walking paths to enable people to visit the reserve without damaging it, and to improve safety for visitors.

During the work we could see a lot of the 150 different species of plants and 47 birds species living in the natural reserve, learning about the ecosystem representative of the East fjords region and spending time immersed in a base where nature is placed in the first level. During the workcamp we took part in some activities organised by the environmental messenger as discussions and games about recycling systems, intercultural understanding, Icelandic movies and a long game about world trade.

Thanks to a well provided kitchen, we decided to dedicated every dinner to a different country, for this reason everybody had the possibility to taste a lot of delicious dish as Japanese soup, French crepes, Spanish tortillas, Italian pizza, Czech pancakes and English rhubarb crumble! We spent also a weekend in Seyðisfjörður, the nearest town!

All the evenings were made enjoyable by long sessions playing cards, and during the free time in the afternoon someone made long hiking walks around the reserve and others tried to go fishing with a good result!