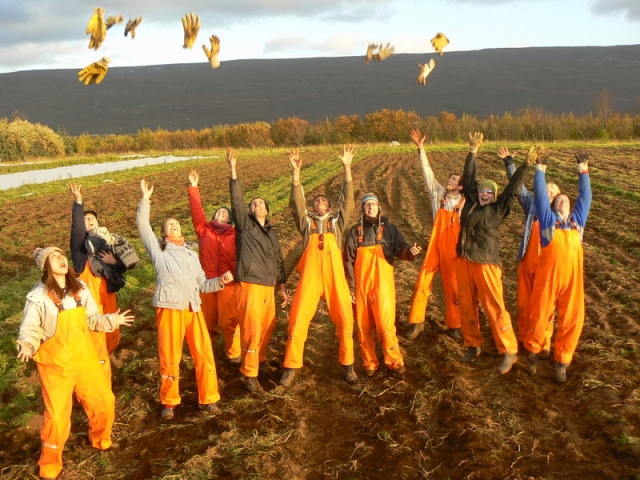 This story is written by the volunteers of the workcamp in Vallanes.

A camp full of self-harvested potatoes, barley and other vegetarian stuff.

Once upon a time, in the Court of Vallanes, lived the Master and his young Assistant. This was in Iceland, although they had Spanish and Estonian roots, respectively. Belonging to the Court, there were also the Count of Belgium, the Countess of Italy and the Marquess of Holland.

The potato harvesting season was about to end and to celebrate this, a big festival took place every year. To take part in this festival a lot of friends from far-far-away were also there: the Princess and Queen of Germany, the Danish Mermaid, the Japanese Geisha, the Maia Princess and the dirty-dirty-dirty French Girls.

One of the last days of harvesting, something terrible happened. The terrifying monster known as "the Goater" assaulted the fields and some peasants were injured/goated. Besides, one of the dirty-dirty-dirty French Girls (actually, the dirtiest), who happened to be there on inspection, was kidnapped.

After this awful event the whole Court was horrified and decided to lock themselves in a shelter called "the Yoga House". They spent some days there, surviving only on barley, beer, National Booze and other vegetarian stuff. The first days were nice, and they amused themselves with Tango dancing, pass-the-barkel game and Jungle Speed. But as time went by, the situation was becoming more and more desperate. Meanwhile, the worried Master spent his days experimenting with some alcoholic beverages in order to give enough strengh to his court to fight the Goater. He finally found his best cocktail and decided to call it "S*x On The Field" (yes, due to so much contact with the dirty-dirty-dirty French Girls, the Master was becoming quite dirty too). Indeed, the ingredients of such an alcoholic piece of art were:

When the Court tasted this masterpiece, a wave of joy and happiness invaded them. Their satisfaction was so great that they even started to see kind of funny lights in the dark sky. At that very moment, they suddenly felt so brave and strong that they decided to go again to the fields and fight the monster together. So the very next morning they went to the fields and remained hidden until the monster appeared. They performed such a devastating attack over "the Goater", throwing potato baskets at him, that the monster, badly injuried, was forced to retreat. However, the Court found a trail of the monster's thick blood and used it to discover his den behind the Heggifoss waterfall. There they rescued the dirty-dirty-dirty French Girl and finished off the monster. So hungry they were, they brought this huge piece of meat back home.

In this way, the potato harvesting festival could finally be celebrated and a delicious roasted Goater was served that eased the craving for meat that the Court had been suffering.

Therefore, the kingdom of Vallanes could harvest potatoes, turnips, cabbage and barley happily ever after.