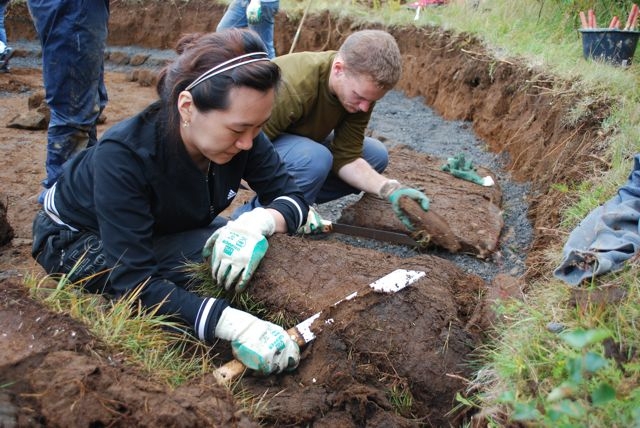 6 Volunteers from Israel, Spain, South Korea and the UK were in Reykjavík, staying in the SEEDS house for the English and environment workcamp.

The camp was designed to give the volunteers some extra guidance in English whilst also doing environmental and heritage work, and the days were divided into days for English/environmental discussions and into working days.

The work was all geared towards making a recreational area in a park near to Reykjavík, using traditional Viking methods and local materials. We started the week preparing our materials and cutting turf which we would later use to build a wall in the park. The work was incredibly demanding and required a lot of physical strength, The turf cutting took two days and then we spent a day loading the turf onto the trailer to transport it to Reykjavik… and then unloading it again when the trailer got totally stuck in the mud and not even 2 huge tractors could pull it out. Although it was hard work, it was a lot of fun digging out the trailer and when we eventually got the turf to our working site near Reykjavík.

After this, we began preparing the ground around our working site using a digger and tools, unloading gravel which formed the foundations for our turf wall, and collecting stones which we would later use to build a path and fireplace. We also spent a day collecting wood from a local forest (yes, with real big trees!) which will be used to build a sculpture in the next project. After building the turf wall, the path, fireplace, and laying grass the site looked fantastic, and it felt like a great achievement to make something which will be there for many years to come.

During our English lesson time, we watched few environmental films and discussed the implications of their topics, learning vocabulary and phrases included in them. Outside of these discussions we made word lists of new words learned every day.

In our free time and after the work our host made every effort to show us much of the local area and to experience some real Icelandic traditions. We visited the geothermal areas around Reykjavík, the Golden Circle, the lake Kleifarvatn, the power station exhibition and were even invited back to his family’s home for coffee and chocolate.

He also showed us the traditional Icelandic delicacy of sheep’s head which some of our campers were very enthusiastic to try. We also took a beautiful trip along the south coast of Iceland.

We shared our international evening with the workcamp on Videy island, but as our host sadly could not make it, we had a second international evening on our last night together. It was a great end to a great camp. Leaving something permanent for the community we worked with and memories of all the fun we had and friends we made.