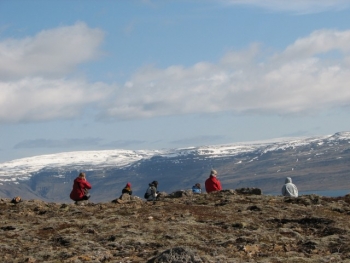 Ask for more information
From 15.07.2009 to 29.07.2009
Type: Environmental
Number of volunteers: 12
Language: English - high proficiency is not required
Accomodation: Mountain hut
Participation fee: 160 EUR
Extra: Excursions to the South of Iceland and a weekend stay away from the project (likely to the Skaftafell/Vatnajökull National Park) will be arranged for SEEDS volunteers. During the days in Reykjavík, SEEDS will provide volunteers with passes to access free

WORK/PROJECT: From the year 2007, SEEDS Iceland has been working with few other NGOs in the South-west of Iceland in charge of the revegetation of this area of the country. The aim of the project is to halt the erosion of vegetation and soils and to strengthen the ecosystem of the area by enhancing its natural vegetation. Through the process of using organic waste materials as fertilizing means, we achieve a double dividend. Close to 70% of the total population of Iceland lives in this area of the country and the area has suffered of overgrazing and volcanic activity; some areas are stripped entirely of top soil.

Formerly harsh eroded and rocky, Heiðmörk is now an attractive and popular outdoor haven for the people of the Greater Reykjavík area, all that because of optimistic and ambitious reclamation efforts in the 20th century. Different kinds of organic waste materials are being generated in great quantities annually in the area. Over 130,000 tonnes of organics are being generated every year in the area, including over 70,000 tonnes of different kinds of manure. Quantities of organic household and commercial waste are also substantial. Causing local pollution problems, these materials have so far lacked a channel where they can be utilized for reclamation purposes. However, better fertilizing agents can hardly be found!

The project strives to combine professionalism with idealism. The reclamation results and efforts can already be seen at a number of sites in the area, despite the project's youth.

Volunteers will basically perform three different types of work: a) Fertilising the slopes in Bláfjöll by yard-waste cover. This is the most important work. b) Monitoring the survival and growth rate of tree plantations of former years. c) Cleaning up in the vicinity of caves in the Bláfjöll area. Volunteers will be working hand-on-hand with Icelandic youngsters from the working school, Vinnuskóli.

ACCOMMODATION: Volunteers will be lodged most of the time directly in the area of Bláfjöll in a fully equipped house and part of the time in a local school in the city of Reykjavík. Volunteers will sleep on mattresses and shall bring a warm sleeping bag. Food ingredients will be provided and a kitchen will be available, volunteers will share the duties of preparing and cooking meals.

LOCATION: The Bláfjöll volcanic mountain range is located about 30 minutes drive from Reykjavík and the river Elliðaá have its source there, streaming down to the lake Helliðavatn in the eastern suburban border of the city, on the way it passes through the nature reserve area of Heiðmörk. The highest mountain reaches 600m and therefore since 1968 the region became a very popular skiing area among Icelanders and the favourite for skiers in the Capital area.

For information on the Icelandic capital, the city of Reykjavík please refer to the descriptions of our projects SEEDS 08, 22 or 23; which are based there.

EXTRAS: Participation fee EUR 160,- . Excursions to the South of Iceland and a weekend stay away from the project (likely to the Skaftafell/Vatnajökull National Park) will be arranged for SEEDS volunteers. During the days in Reykjavík, SEEDS will provide volunteers with passes to access free of charge the city's seven geothermal swimming pools and beach.