SEEDS 104. Battling Litter in the Fjords of Trolls
West Fjords 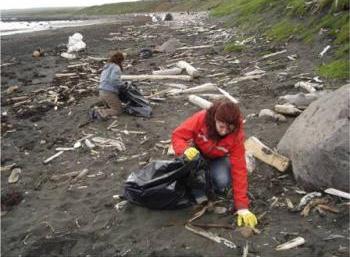 Ask for more information
From 02.08.2016 to 13.08.2016
Type: Environmental
Number of volunteers: 8
Language: English will be the official language in the camp; high proficiency is not a requirement.
Accomodation: Volunteers will stay in a school house equipped with kitchen; sleeping on mattresses in sleeping bag accommodation.
Participation fee: 180 EUR
Extra: The host will organise some free-time activities depending on the weather.

WORK/PROJECT: The projects aim is to clear as much litter as possible off the coast of Steingrimsfjardar bay and Drangsnes - one of the biggest pollution issues in the area.

Litter derives from many sources including land based activities such as factory waste, rubbish left on beaches, litter blown into the sea and storm water drains in towns and cities. It is also dropped from ships such as container ships and fishing vessels. Animals often become entangled in fishing nets and ropes that have been abandoned, lost or discarded.

A high percentage of litter in our oceans is plastic, which decomposes slowly and can cause a risk to marine wildlife as they can either mistake it for food or get tangled in it. Furthermore, as the plastic breaks down into smaller pieces it can be easily ingested by animals. Additionally, some of the seafood we consume has been exposed to these plastics, and research is unsure of the impacts to human health. Clean beaches are also important for the tourism industry, which is an important revenue source for many locations around Iceland.

Food ingredients will be provided and the group will be responsible for cooking and cleaning.

Please do not forget some traditional food from your home country for the international evening.

LOCATION: The West Fjords is one of the most breath takingly beautiful places in Iceland, with its high mountains of extreme beauty and dramatic fjords cutting deep into the landscape.

The project is located in the Kaldrananeshreppur municipality in a small town called Drangsnes. It has 73 inhabitants. The municipality is in the district of Strandasysla. Strandasysla covers the easternmost part of the Westfiords. Its coastline is indented with fiords and the sea is dotted with many islands and islets.

The story says that the Westfjords were nearly separated from Iceland by three relentless trolls, furiously digging the Westfjords away from the mainland. One troll woman, called Kerling, competing against her conspirators realized that her task would not be accomplished and slammed her shovel down in a rage, breaking off a chunk of land, thus forming Grimsey, on Steingrimsfjordur bay. Though the trolls were unsuccessful in breaking off the Westfjords, the choppy coastline at the far end of Steingrimsfjorður bears marks of the troll woman’s handiwork. Her grim profile, transformed into stone by the first rays of sunlight, now watches over Grimsey.

Drangsnes, a small fishing village in Kaldrananeshreppur municipality. The village got its name from a tall rock (Drangur) named Kerling which according to the story is one of the three trolls who tried to separate the West Fjords from the rest of Iceland.

SEEDS organises the “minibus option”, a shared transport from Reykjavík to the camp and vice-versa, which apart from being cheaper and more convenient, allows volunteers to meet fellow campers and have a relaxed trip, while stopping on the way for interesting and tourist sites.

EXTRAS / SPECIAL REMARKS: Participation fee EUR 180 (Euros). Please note that these fees are to be paid to SEEDS on arrival in either Euros or Icelandic krónas.

The host will organise some free-time activities depending on the weather.

Please bring warm clothes and outdoor wear as the weather in Iceland can be quite unpredictable, even during the summer months.