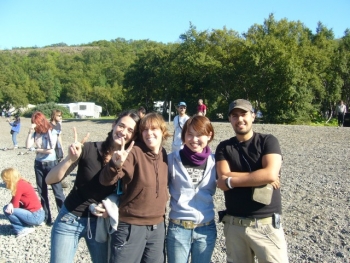 SEEDS Iceland will continue building the partnership with the Environmental agency of Iceland (Umhverfisstofnun) and the volunteers will support a research project on invasive species conducted by a team of scientist from the University of Iceland and the Soil Conservation Service of Iceland (Landgræðsla ríkisins). The Lupin plant (from Alaska) has been used in Iceland in order to control soil erosion and re-vegetate eroded areas; but in some places its spread is more than desirable and being a foreign specie endangers the native habitat in the National Park; the research project focuses on the use, management and control of invasive species in Iceland.

The work with the community at Kirkjubæjarklaustur supports the creation of alternatives ways of income through tourism in the area. Volunteers will be working on few different projects in the rural area of Kirkjubæjarklaustur, few kilometres outside of town. The main task will be building a walking pathway to a bird watching house, and if time allows the volunteers will also plant trees alongside the path. Volunteers will also work on additional tasks that need to be worked on for the summer before the largest amounts of visitors come to the area in July and August.

Well maintained paths enable people to visit these amazing areas without damaging them and this important work also helps to improve safety for visitors. The working day normally runs from 09:00 to 17:00 with breaks for lunch and coffee. However, please be prepared for some flexibility due to the nature of Iceland's changeable weather.

LOCATION: SEEDS volunteers will work in 2 of the most beautiful places in Iceland!! Part of the project will take place at the largest National Park in Europe, Vatnajökull N.P., stretching from the south coast to the north coast of the island; it is the largest protected wilderness in Europe. It covers around 15.000 km2 (15% of the surface of Iceland), including all of Vatnajökull glacier, the former Skaftafell N.P., Jokulsargljufur N.P. and surrounding area. Due to the size of Vatnajökull National Park it is established and operated under special law, it is an autonomous government agency that requires cooperation between nine municipalities. The other part of the project will take place in Kirkjubæjarklaustur, in the south of Iceland. The scenery is truly spectacular, with the glacier Myrdalsjökull to the west and Europe´s largest glacier Vatnajökull, containing Iceland´s highest peak, to the east. The area is welcoming with mountains that stretch proudly towards the sky and to the south there is the infinite beauty stretching out from the sky to the sea.

TERMINAL: As last years, SEEDS will organise the "minibus option", a shared transport from Reykjavík to the workcamps and vice versa, which apart from being cheaper and more convenient, allows volunteers to meet fellow campers and have a relaxed trip to the project site, while stopping on the way for interesting and tourist sites. Closest international Airport: Keflavík (Reykjavík), KEF.