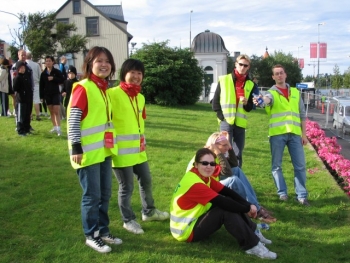 WORK/PROJECT: SEEDS volunteers will support this year again Listahátíð í Reykjavík (the Reykjavík Arts Festival). Volunteers will be following the exhibition called “Campingwomen”, which will travel around Reykjavík during the Reykjavík arts festival (Listahátíð í Reykjavík). The role of the volunteers is to be guardians of the five camper vans which make up the exhibition. Campingwomen are functional caravans from the 60s and 70s. The torsos of the female figures grow out of the roof so that the caravans function as the women’s skirts. Each woman is approximately 4 meters tall. The caravan, the camping life, the traveller, the transportable home, memories of cramped spaces with the family close together – cosiness and the holiday, or the explosive nature of these elements – give rise to many associations and also to the stories associated with gypsies and circus people, the travellers. The woman and the secrets she hides or reveals also gives rise to interpretations.

ACCOMMODATION: Volunteers will be lodged in a local housing. There will be bunk beds, mattresses and all facilities needed. Food will be provided, so cooking and common tasks will be shared fairly among the participants. A warm sleeping bag is highly recommended.

The Festival is held every year in May. It was held biennially from 1970 and annually from 2004. The Festival is one of Northern Europe’s oldest and most respected arts festivals. It is organised by an Artistic Director, appointed by the Board. The three Board members are appointed, respectively, by the Minister of Culture and Education, the Mayor of Reykjavik and the Festival´s Council of Representatives. Vladimir Ashkenazy, one of the founders of the Festival, has been honorary president from the outset. The patron is the President of Iceland, Ólafur Ragnar Grímsson.

The purpose of the Festival is to promote Icelandic and international culture in all fields of art. The programmes offer a range of concerts, theatre performances, exhibitions, dance and opera. In combination with its focus on Icelandic culture, past and present, the Festival has hosted many outstanding international artists and performers.

* The name Reykjavík means "smoky bay": Given by the first settlers that arrived to the area due to the high geothermal activity and the constant rise of steam out of the hot springs around.