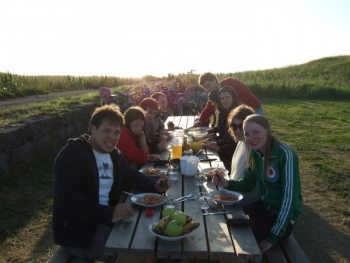 WORK/PROJECT: Volunteers will be working in the municipality of Grýtubakkahreppur in the north of Iceland on changing an old stall (sheepfold) into a family friendly place. In the stall there will be facilities to host lectures and seminars about art and environment and parents can have coffee and appreciate art while the children play. Besides from assisting in the renovation of the sheepfold the volunteers will be working on various projects, for example making and putting up benches around a fishing pond and natural hotpot which are in the area and marking hiking pathways.

Tourism is becoming an alternative source of income for the area, due to its natural beauty and attractions; volunteers will work on projects related to the promotion of tourism, making the area friendlier to visitors and with good facilities to welcome them.

ACCOMMODATION: Volunteers will be hosted in a local house; sleeping on mattresses on the floor; bringing a warm sleeping bag is highly recommended. Food ingredients will be provided and a kitchen will be available, volunteers will share the duties of preparing and cooking meals.

LOCATION: The municipality of Grýtubakkahreppur is located in the north of Iceland; the biggest inhabited area in the municipalities around it is Akureyri, sometimes referred to as the capital of the north. Volunteers will be working about 30 km outside the town. The municipality of Grýtubakkahreppur has about 360 inhabitants. Around 100 people live there in the rural area and there is a strong agricultural sector, mainly growing potatoes. The largest town in the municipality is Grenivík, the village does not have a long history since it did not start to form until around the year 1900 and around the middle of last century the fishing sector started to form.

The workcamp takes place in Fnjóskadalur, which is about 40 km long, and flowing through it is the Fnjóská River, the longest spring-fed river in Iceland. Ljósavatnsskard Pass stretches east from Fnjóskadalur Valley, connecting it with Bárdadalur Valley and Kaldakinn. Lake Ljósavatn lies in the mouth of the pass to the east. Djúpá River flows into Skjálfandafljót on the east side of Mt. Kinnarfell. Kambsá River flows into Lake Ljósavatn.

Bárdardalur Valley is one of the oldest settled valleys in Iceland; it is about 45 km long, and Skjálfandafljót flows along its bottom. Godafoss Falls are regarded as one of the most beautiful waterfalls in Iceland. Cliffs at the edge of the falls divide it into two main waterfalls, 9 and 17 m high, and several smaller ones. A story says that Thorgeir Ljósvetningagodi threw his gods into the waterfall after Christianity was made law in 1000, and the waterfall got its name from this event.

There are several caves in the rock down by the river, as Sölvahellir, after a story saying that in this cave lived Sölvi, an outlawed robber, until he was found and killed. There are more falls, as Barnafoss and Ullarfoss. Kidagil is also in the area; Grímur Thomsen made Kidagil immortal in his poem Sprengisandur: "I would give my most treasured horse to be safely arrived in Kidagil", quoting a traveller on horseback who is beginning to pine for reaching a settled area.

STUDY THEME: Environmental messenger in the project. S/he will be in charge of delivering ecological and global education messages to both, International volunteers and local hosts through organised activities as workshops, presentations, simulations, discussions, games on topics related to environment, nature protection and sustainability as use of resources, globalisation, millennium development goals, global warming, fair trade, recycling, consumption, etc..

TERMINAL: Closest International Airport: Keflavík (Reykjavík), KEF. Closest bus stop: Akureyri. SEEDS organises the "minibus option", a shared transport from Reykjavík to the camp and vice-versa, which apart from being cheaper and more convenient, allows volunteers to meet and have a relaxed trip, while stopping on the way for interesting and tourist sites.