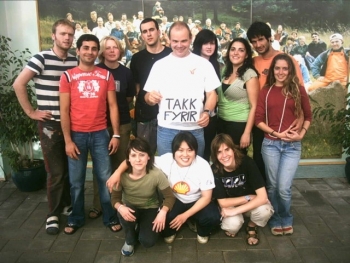 Ask for more information
From 08.09.2009 to 22.09.2009
Type: Environmental / Construction
Number of volunteers: 8
Language: English - high proficiency is not required
Accomodation: Local housing
Participation fee: 120 EUR
Extra: Some free time activities will be organized for the volunteers.

WORK/PROJECT: Volunteers will be working on various different projects in the western fjords of Iceland as building a light bridge over a stream on a walking path that leads to a natural hot pot, forming walking pathways in a valley, cleaning the area after the summer and assisting in changing an old stall (sheepfold) into a greenhouse.

ACCOMMODATION: Volunteers will be hosted in a local housing; sleeping in bunk beds; bringing a warm sleeping bag is highly recommended. Food ingredients will be provided and a kitchen will be available, volunteers will share the duties of preparing and cooking meals.

LOCATION: The workcamp will take place in the Western fjords of Iceland. The fjords and jutting fingers of land that makes up the West fjord region in the north-western part of Iceland, account for one tenth of the country’s landmass. The region is bounded by Breiðafjörður in the south, with Gilsfjörður cutting into the land from the west and Bitrufjörður from the east, the two almost severing the ragged peninsula from the main mass of Iceland. The West Fjords are made up of Ísafjarðar-, Barðastrandar-, and Strandir Counties. In the West fjords you will travel through the whole range of Icelandic flora from the shore and meadows, through birch and willow, to mossy moors. On a stroll amidst the driftwood on the shore one can see birds and seals and then an occasional arctic fox around the deserted farmsteads.

Farms in the West Fjords are widely scattered and tied to the towns where ocean fishing and services are the main economic pursuits. The farmers concentrate on raising sheep but they take advantage of other benefits, as in the old days, for instance gathering eider down and driftwood and birds, eggs, and catching puffins. For centuries people were lowered down the cliffs with ropes to collect birds and eggs, but the custom is dying out and seal hunting too. Well into the nineteenth century whales were harpooned by hand in the fjord. The same is true of fishing for sharks, which was practiced in the twentieth century, usually for the oil.

Communications in the West Fjords have greatly improved in recent years. The roads have increasingly been paved and not least, the longest tunnel in Iceland now connects Ísafjördur with the nearby communities. In addition, there are now bridges over fjords that before the travellers had to drive around. Travelling in winter is now relatively easy and the main roads are kept open. Roads lead to and around fjords, peninsulas and steep hills.

Driving around inviting fjords with brush growing on the hillsides and in the valley bottoms and huge flocks of birds and seals lazing on the rocks, almost close enough to touch, present an endless source of beauty.

The workcamp will take place in a valley covered with birch bushes in Mjóifjörður in Ísafjarðardjúp in North West Iceland. The distances to the next town and villages are 130 km to Isafjörður, 90 km to Hólmavík and 150 km to Búðardalur. Hiking in this beautiful area is very impressive and an inspection of the coastline is also an inspiring option.

STUDY THEME: Environmental messenger in the project. S/he will be in charge of delivering ecological and global education messages to both, International volunteers and local hosts through organised activities as workshops, presentations, simulations, discussions, games on topics related to environment, nature protection and sustainability as use of resources, globalisation, millennium development goals, global warming, fair trade, recycling, consumption, etc.

TERMINAL: Closest International Airport: Keflavík (Reykjavík), KEF. The closest domestic airport is Ísafjörður (IFJ). SEEDS organises the “minibus option”, a shared transport from Reykjavík to the camp site and vice-versa, apart from being cheaper and more convenient, it allows volunteers to meet fellow campers and have a relaxed trip, while stopping on the way for interesting and tourist sites.