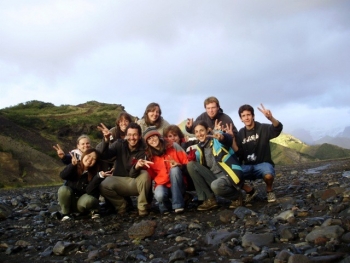 Ask for more information
From 28.08.2009 to 11.09.2009
Type: Environmental / Construction
Number of volunteers: 8
Language: English - high proficiency is not required
Accomodation: Local housing
Participation fee: 120 EUR
Extra: Free time activities and excursions in the surrounding will be organized for SEEDS volunteers.

WORK/PROJECT: Volunteers will be working on few different projects close to Kirkjubæjarklaustur. The main task will be renovating and reconstructing a wall, Bjarnagarður, which was originally constructed around the year 1100 to keep livestock intact. Originally the wall was 10km long, but the volunteers will only be working on a small part to preserve it. The remains of this wall are very visible but worn down.

ACCOMMODATION: Volunteers will be hosted in a local housing; sleeping on mattresses on the floor; therefore bringing a warm sleeping bag is highly recommended. Food ingredients will be provided and a kitchen will be available, volunteers will share the duties of preparing and cooking meals.

LOCATION: The workcamp is located about 5 km of the village Kirkjubaejarklaustur, within easy reach of the main ring road, and around 3 hours driving distance from the capital Reykjavík. Kirkjubæjarklaustur is located in the south of Iceland between Vík and Höfn. The scenery is truly spectacular, with the glacier Myrdalsjökull to the west and Europe´s largest glacier Vatnajökull, containing Iceland´s highest peak, to the east. The area is welcoming with mountains that stretch proudly towards the sky and to the south there is the infinite beauty stretching out from the sky to the sea.

The village, Kirkjubæjarklaustur, became well known in Iceland during the Lakagígar volcano eruptions in 1783. The pastor of the local church, Jón Steingrímsson, delivered what became known as the "Fire Sermon". The legend says that this sermon stopped the lava flow, and the village was spared at the last moment. The current church, constructed in 1974, was built in memory of Reverend Jón Steingrímsson.

In Kirkjubaejarklaustur there all the necessary services such as a bank with automated teller machine, swimming pool, grocery store, health centre, post office etc. Kirkjubæjarklaustur is located in the immediate vicinity of some of Iceland´s most spectacular natural pearls including the Vatnajökull National Park, the volcano Laki, the Glacier Lagoon with floating icebergs as seen in various movies and Ingolfshöfði.

The area is surrounded with the Landbrotsholar pseudo-craters which are some seven thousand years old. Tröllshylur is also close by and the beautiful long canyon Fjarðarárgljúfur. An attraction close by is Kirkjugólf (Churchfloor), a natural pavement of basalt. These are basalt columns in the earth, but only the top can be seen, and, as the name suggests, have the appearance of a paved church floor. This lava formation has similar origins to the Giant's Causeway in Ireland. All these attractions contribute to Kirkjubaejarklaustur being a popular stopping point. It cannot be forgotten that the area also consists homes of elves, they have a village close by and psychic people have seen the hidden people there.

STUDY THEME: Environmental messenger in the project. S/he will be in charge of delivering ecological and global education messages to both, International volunteers and local hosts through organised activities as workshops, presentations, simulations, discussions, games on topics related to environment, nature protection and sustainability as use of resources, globalisation, millennium development goals, global warming, fair trade, recycling, consumption, etc..

TERMINAL: Closest International Airport: Keflavík (Reykjavík), KEF. The closest bus station is in Kirkjubæjarklaustur. SEEDS organises the “minibus option”, a shared transport from Reykjavík to the camp location and vice-versa, apart from being cheaper and more convenient, it allows volunteers to meet fellow campers and have a relaxed trip, while stopping on the way for interesting and tourist sites.