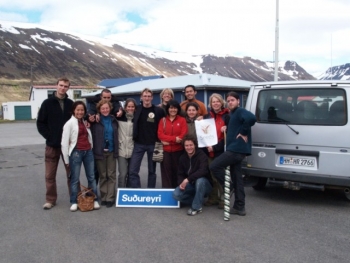 Ask for more information
From 19.08.2009 to 02.09.2009
Type: Renovation / Construction
Number of volunteers: 14
Language: English - high proficiency is not required
Accomodation: Local housing
Participation fee: 150 EUR
Extra: Excursions in the area will be arranged for volunteers by our local host. Please expect plenty of Icelandic cod and haddock in the menu and loads of fun sailing and catching your own food!!

WORK/PROJECT: SEEDS volunteers will once again join a project in the community of Tálknafjörður and its surrounding area. Volunteers will specifically continue working at the old whaling station in Suðureyri. Volunteers’ work will mainly be focused on renovation and reconstruction works in the old buildings and former facilities of the whaling station, and continue the work of the last 2 years by other groups of SEEDS volunteers.

After being abandoned for more than half a century, some of the buildings have collapsed and the ruins are spread all around in the area. The main aim in the longer-term of the project is to rebuild the facilities and have an art gallery and historic exhibit about the whaling station, whaling in Iceland, its history and the different developments throughout the last 2 centuries on the topic as its impact in the local socio-economical circumstances.

The group will be divided in different teams and tasks will be rotated. One of the sub-groups will be in charge of catching the fish, collecting berries and gathering the ingredients as Icelanders used to cater themselves some decades ago when the country and this region in particular were very isolated and transport of “foreign” goods and products was almost non-existent. Fishing gear, boat, as needed equipment and training will be provided by our local hosts. In case of unsuccessful journeys to “catch our food”, we will have at our disposal a boat to sail to the nearest convenience store, on the other side of the fjord in the town of Tálknafjörður.

ACCOMMODATION & FOOD: Volunteers will be hosted in a local house at Suðureyri, will sleep on bunk beds in shared rooms and are asked to bring their own sleeping bags. Electricity will be available for short periods of time a day (with a diesel generator), but a fully equipped kitchen running on gas is at disposal. Geothermal hot pots are easy to be reached by boat on the opposite side of the fjord, as the swimming pool, convenience store and additional facilities in the town of Tálknafjörður.

LOCATION: Suðureyri is located in the district of Tálknafjarðarhreppur in the Icelandic Western Fjords. Tálknafjörður is the main and only “considerable-sized” town in the district with around 300 inhabitants. Suðureyri, on the opposite -western- side of the fjord was the location of an old whaling station built at the end of the 19th century by Norwegian whale hunters, which was on and off operation for around 50 years until the year 1939 and is now deserted. During its busiest times around 110 people lived and worked at the station. Today the great buildings are grand monuments of times past. Nearby is the valley of Suðureyri, Suðureyrardalur, the biggest valley on the south-west side of Tálknafjörður.

The town of Tálknafjörður, sometimes referred to as Sveinseyri, lies near the head of the Tálknafjörður, the fjord, and the main sources of income are fishing and farming. It differs from the other so-called Western Fjörds in the fact that there is geothermal activity and the water is used for heating and in the swimming pool. Tálknafjörður is located around 400 Km from the Icelandic capital Reykjavík and around 160 Km from Ísafjörður, the biggest town in the Western Fjords.

TERMINAL: Closest International Airports: Keflavík – Reykjavík (KEF) and closest bus stop is in the town of Tálknafjörður. SEEDS organises the “minibus option”, a shared transport from Reykjavík to the camps and vice-versa, which apart from being cheaper and more convenient, allows volunteers to meet fellow campers and have a relaxed trip, while stopping on the way for interesting and tourist sites.

EXTRAS/SPECIAL REMARKS: Participation fee EUR 150,- (Euros). Excursions in the area will be arranged for volunteers by our local host. Please expect plenty of Icelandic cod and haddock in the menu and loads of fun sailing and catching your own food!!