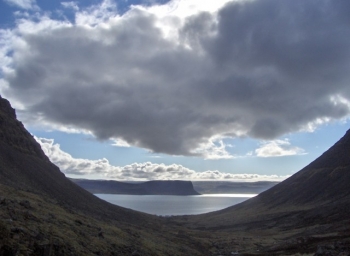 Ask for more information
From 02.06.2009 to 16.06.2009
Type: Environmental / Construction
Number of volunteers: 14
Language: English - high proficiency is not required
Accomodation: Local housing
Participation fee: 120 EUR
Extra: Excursions in the area as boat trips and hikes will be arranged for volunteers.

WORK/PROJECT: Volunteers will be working on few different projects in two different towns, Bíldudalur and Tálknafjörður, located in the Icelandic Western fjords. The tasks are varied and will depend on the weather conditions and sailing conditions as one of the working sites need to be reached by boat; Geirþjófsfjörður. Volunteers’ tasks will be mainly building and maintaining hiking trails and pathways in the area. Additional tasks may include putting up signs and descriptive information charts for the trails, clearing old oil tanks from the abandoned farm lands in Geirþjófsfjörður and general clearing of the coast line in both fjords, Arnarfjörður and Tálknafjörður.

ACCOMMODATION: Volunteers will be hosted in a local house; sleeping on mattresses on the floor; therefore bringing a warm sleeping bag is highly recommended.

LOCATION: Bíldudalur and Tálknafjörður are small fishing towns, at Arnarfjörður and Tálknafjörður respectively; communities in the Icelandic western fjords, where the main trades are/were fishing and fish processing. However, during the last years and due to the introduction of the quota system in the Icelandic fishing sector, the towns lost their share in the fishing amounts to be caught and this has strongly hit the economy and living situation in the area, which will be one of the issues addressed during the workcamp. In the past years the emphasis on alternative industries has been more visible, similar to other fishing villages. This area in the south of the Western fjords is famed for its beautiful landscape and good weather with warm and sunny summers with gentle breezes, conditions which are hospitable for fishing, swimming, hiking and a variety of other activities.

Langibotn in Geirþjófsfjörður is one of the places where the story of Gísli Súrsson took place, which is one of the most famous Icelandic sagas. Although the saga is only preserved whole in later manuscripts, it was most likely written down in the early 13th century with action occurring between 940-980 A.D. Gisli Sursson's Saga is a classic outlaw saga that is centred on the internal struggles of Gisli, the saga's protagonist, a 10th century settler who ends up outlawed - that is, being declared a person who could be legally killed by anyone finding him - after he avenges the death of his blood brother. Differing from the typical Icelandic Saga, it uses the common theme of vengeance to divide loyalties within with family instead of strengthening familial bonds.

From Langibotn, you can walk up to the cliff Einhamar, where Gísli was killed. The vicinity offers a variety of interesting places to explore and hiking and mountain climbing are popular. The sheer beauty of the region attracts people and tourism has started to play an increasing role recently. The distance from Reykjavik is 475 km (7 hours drive) by the Whale Bay tunnel but only 300 km via Stykkisholmur and by the ferry to Brjánslaekur. It is perhaps one of Iceland's most remote areas.

Bíldudalur and Tálknafjörður are located in the Icelandic Western Fjords, which are too often missed by visitors due to its distance (real and perceived) from Route 1, the circle road, and from other population centers. The West Fjords are a mass of fjords, mountains and isolated villages on spits of lands surrounded by water and mountains. The area includes its own glacier, the magnificent, remote Hornstrandir and Europe's westernmost point of land at Látrabjarg, there, millions of birds nest in the cliffs making it a must for bird watchers.

TERMINAL: Closest International Airport: Keflavík (Reykjavík), KEF. Domestic airport is Bíldudalur (BIU). SEEDS organises the “minibus option”, a shared transport from Reykjavík to the camps and vice-versa, which apart from being cheaper and more convenient, allows volunteers to meet fellow campers and have a relaxed trip, while stopping on the way for interesting and tourist sites.

SPECIAL REMARKS / EXTRAS: Participation fee EUR 120,- (Euros). Excursions in the area as boat trips and hikes will be arranged for volunteers.