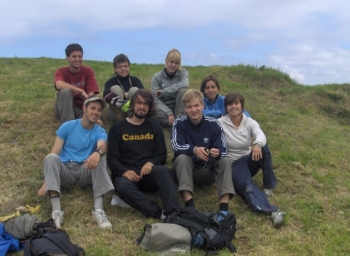 Ask for more information
From 18.05.2009 to 01.06.2009
Type: Environmental / Construction
Number of volunteers: 12
Language: English - high proficiency is not required
Accomodation: Local housing
Participation fee: 90 EUR
Extra: Excursions, trips and hikes in the area will be arranged for volunteers during their free time.

WORK/PROJECT: Volunteers will be working on preserving Eldfell, the youngest mountain in Iceland which was formed in a volcanic eruption in 1973, with few different tasks. Volunteers’ work will be focused on the part of the mountain that is mostly affected by the wind by cleaning, seeding and fertilising the area. The work will be very hands on and demanding since it is impossible to bring working equipment to the mountain.

LOCATION: The Westman Islands are a group of 15 to18 islands, depending on how they are classed. The islands were formed by submarine volcanic eruptions along a 30 km long fissure lying southwest to northeast. The largest island is Heimaey, 13.4 km2 and has almost 4.500 inhabitants. Most of the islands have steep sea cliffs, and are well vegetated. Bird hunting and egg collecting are traditional to the islanders’ culture but hunting and fishing are the traditional mainstays of the island economy. Rich fishing grounds surround the islands. For many years Heimaey was one of Iceland´s largest fishing stations. During the main season, people, from all places and walks of life, flocked here to work long hours and earn money. The population of the town trebled and the number of boats multiplied. Today, ships are larger and more technologically advanced production has moved from land-based freezing plants to factory ships and consequently the hustle and bustle of the main season is much a thing of the past.

On 23rd January, 1973, an eruption began in Heimaey just before two o’clock in the morning. A fissure opened on the eastern side of the island, only 300-400 metres from Kirkjubæir; the most easterly houses in the town. The inhabitants of Heimaey were woken by the police and fire brigade as they drove around, raising the alarm with their sirens. People streamed down to the docks. Fortunately the weather had been stormy the day before and most of the island´s fleet of 60-70 fishing boats had stayed in harbour. The boats ferried the town’s people to safety in Þórlákshöfn. In March, molten lava threatened to close the harbour approaches. In a desperate attempt to stop the flow, seawater was pumped on to the lava. This method proved very effective. Today the harbour is considered to be even better than before. The eruption ended on 3rd July, 1973. In six months a new volcano, Eldfell, 225m high, had appeared on the island and a new lava field lay to the east and covered 3.3 km2. Around 360 houses had been buried and many others badly damaged. Before the eruption 5.300 people lived on Heimaey, 2.000 of these moved back immediately after the eruption ended. Slowly but surely more families returned and began to rebuild their community.

TERMINAL: Closest International Airport: Keflavík (Reykjavík), KEF. Domestic airport is Vestmannaeyjar (VEY). SEEDS organises the “minibus option”, a shared transport from Reykjavík to the harbour in Þorlákshöfn, where the ferry Herjólfur takes the volunteers to the islands and vice-versa, apart from being cheaper and more convenient, it allows volunteers to meet fellow campers and have a relaxed trip, while stopping on the way for interesting and tourist sites.

SPECIAL REMARKS / EXTRAS: Participation fee EUR 90,- (Euros). Excursions, trips and hikes in the area will be arranged for volunteers during their free time.