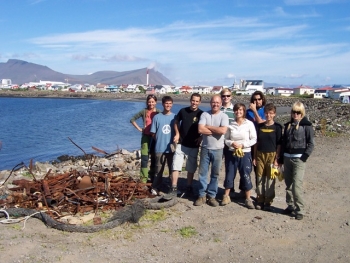 Ask for more information
From 04.08.2008 to 18.08.2008
Type: Environmental
Number of volunteers: 12
Language: English - high proficiency is not required
Accomodation: Fully equipped apartments
Participation fee: 140 EUR
Extra: Visits to geothermal active areas and power plants in the area, hikes and excursion will be organised for the volunteers during their free time. Pick-up from the Keflavík (Reykjavík) International Airport.

WORK/PROJECT: The town of Reykjanesbær and the communities surrounding it, will receive SEEDS volunteers again this year; there we will be performing different tasks related to the environment and the outdoors public areas in the towns and also within the premises of the former NATO base located in the Reykjanes peninsula, which was closed on 8 September 2006; the former military base is being turned into a dynamic knowledge and academic community.

We will work in different sites all around the area and our tasks will be varied including cleaning up the public spaces within the former base, collecting and hand-picking sea-waste at the shores and coastline outside, helping with gardening tasks, maintaining tree-beds; clearing up former barbwire fences and the area around the fences and in general works making the area a more friendly one.

Some of the working sites are located in different towns (Garður, Grindavík, Hafnir, Keflavík, Njarðvík & Sandgerði) and communities in the area as this camp is part of a bigger scale project run by SEEDS in cooperation with several parties in the region; therefore the jobs performed and the sites will mostly depend on the advance of the work at the different locations.

ACCOMMODATION: We will stay at 2 equipped apartments within the former base, in shared rooms, sleeping on mattresses on the floor; therefore bringing a sleeping bag is needed. Food ingredients will be provided and volunteers will share the duties of preparing and cooking meals.

LOCATION: Reykjanes, peninsula at the south-western end of Iceland is located near the capital and most travellers to Iceland land in the area: As the Reykjanes coastline draws closer and the plane prepares to land at Keflavík Airport, the peninsula is marked by active volcanism under its surface, and large lava fields allow little vegetation. There are numerous hot springs and sulphur springs in the southern half of the peninsula, around the Kleifarvatn Lake and the Krýsuvík geothermal area where hot springs spewing water and mud dominate the landscape. The Peninsula is envied for its long & short hiking trails that zigzag through the region where colorful landscapes and their contrasts delight the visitor. Amazing ocean cliffs, (up to 70 m high) are nested by numerous bird species, often a wonderful spot for bird and whale watching.

There is also a geothermal power station at Svartsengi, where a swimming pool has been installed using the hot and mineralized water coming down from the station; it is known as the "Blue Lagoon" (Bláa Lónið). The Leif the Lucky Bridge or Miðlína bridge spans the Álfagjá rift valley (60 feet wide and 20 feet deep) near Grindavík that marks the boundary of the Eurasian and North American continental tectonic plates, named after Icelandic explorer Leif Eriksson who travelled from Europe to America 500 years before Columbus. The peninsula is also known for its buzzing cultural life. Musical talent is abundant and Keflavík is known as the birthplace of rock and roll in the country.

Reykjanes has a long history of seafaring, and some of the oldest lighthouses in Iceland dot the coastline to guide sailors home. Some fishing towns, such as Grindavík, where is located the Salt fish Museum of Iceland (telling the story of its production and importance to the Icelandic economy) and Njarðvík are situated on the peninsula as well as the town Keflavík, the site of the International Airport, the Leifur Eriksson Air Terminal and the former military base, which hosts now Keilir (Atlantic Centre of Excellence), Innovation Center Iceland (NMI), the University of Iceland (UI), the Keflavík Airport Development Corporation (KADECO) and the Eldey Entrepreneurial and Energy Centre.

STUDY THEME: Environmental messenger in the project. She/he will be in charge of delivering ecological and global education messages to International volunteers and local hosts.

EXTRAS: Participation fee EUR140. Visits to geothermal active areas and power plants in the area, hikes and excursion will be organised for the volunteers during their free time. Pick-up from the Keflavík (Reykjavík) International Airport for those landing on the first day of the camp and transport from the apartments to the airport on departure is included.