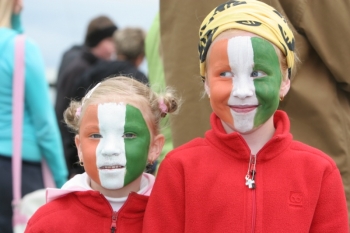 WORK/PROJECT: Volunteers will work mainly with the environmental and public areas department of the township of Akranes (Akraneskaupstaður) and be involved during the “Irish Days” festival in Iceland. Different types of projects will be developed and depending on their advance, volunteers will share tasks in already started projects in an ancient fish-drying area, hiking paths and trails. At the end of the camp, volunteers will be active during the entire festival, helping during the preparation, the festival itself and once it has finished.

ACCOMMODATION: Volunteers will be lodged in the local sports centre and will sleep in shared rooms and within the facilities we will have a kitchen to cater ourselves. Food will be provided and meals will be then prepared/cooked by volunteers ourselves. We luckily have access to the nearby local swimming pool and sport centre with top-quality facilities.

LOCATION: The town of Akranes* lies just across the Faxaflói Bay and it is visible from Reykjavík on a clear day. Settled by Irish brothers in the year 880, it is now a blossoming industrial town with a focus on fishing and fish production. It started to form in the 19th century as a fishing village, and in 1942, it was formally chartered; in the following years experienced the biggest surge in population in its history. Industry has been a big and growing employer: a cement plant operates in the town since the 1950s, and an aluminum smelter works near the town since 1998. Today, the community is composed by over 6000 inhabitants, which makes it the biggest in the Icelandic West.

The town is expected to grow further in the coming years because of growing industry and improvements of transportation to the Reykjavík area, following the construction of the 5.57 km long Hvalfjörður Tunnel which was opened in 1998, one of the world’s longest underwater road tunnels. Akranes has a strong football tradition and the local team, ÍA, has for many years been among the best of the Icelandic football league.

The festival “Irish days” in Akranes will take place for the seventh time in July this year; the reason for why there are Irish days in Akranes is that the town was founded by Irish brothers – Þormóður and Ketill Bresasons shortly after 880. They came to Akranes with their grown children and other people. The brothers were both born and raised in Ireland, but their family was originally from Norway.

The Irish days have gotten bigger and bigger each year. Last year twelve thousand people came to visit and almost every single one of the 6 thousand inhabitants took part in the festival. Two thousand people went to a dance held in the old cement storage next to the harbour where two of the nation’s most popular bands played. That made it one of the biggest dances in Iceland that year. The ones organizing the event this year think that double as many might come this year.

STUDY THEME: Environmental messenger in the project. S/he will be in charge of delivering ecological and global education messages to both, International volunteers and local hosts through organised activities as workshops, presentations, simulations, discussions, games on topics related to environment, nature protection and sustainability as use of resources, globalisation, millennium development goals, climate change, fair trade, recycling, consumption, etc. We intend to raise awareness and to encourage the participants to undertake simple but easy-to-implement actions which will affect the way we deal with the environment and the world we live in.

* The name Akranes indicates that in the old days corn was grown in the fertile land around Mt Akrafjall which towers in the background of the town.