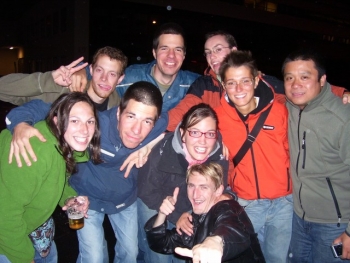 WORK/PROJECT: The City of Reykjavík* will be our host for the third year in-a-row and this time again SEEDS volunteers will be performing different tasks related to the environment and the outdoors public areas of the city; as to the biggest cultural gathering of the country: The Culture Night (Menningarnótt), to be held this year on August 23rd.

We will be working in two main fields: Environment/green public areas and the festivities connected to the Culture Night. For the first part of the project volunteers will be working hand-in-hand with the local teams of Icelandic youngsters in charge of the public spaces in the city, its surroundings and responsible for the environmental affairs and green areas; while at the end we will be collaborating, helping and participating at the different events before, during and after Menningarnótt; supporting the organisers of the events and sharing tasks with local families and inhabitants of the centre of the city (district 101 Reykjavík) during the Saturday.

The work with the teams of local youngsters and with the local families and inhabitants of the 101 Reykjavík district will give SEEDS volunteers throughout a great opportunity to mingle with Icelanders and to enjoy its capital from the side of the hosts of these remarkable happenings.

ACCOMMODATION: Volunteers will be staying in a modern sports centre in the city in shared rooms and will have access to the facilities of the centre; bringing a sleeping bag is needed. Lunch will be given by the city of Reykjavík within the weekdays, while for breakfast and dinner, food ingredients will be provided and volunteers will share the duties of preparing and cooking meals.

The world’s northernmost capital bridges the Atlantic, between Europe and North America, is framed by the majestic Mt. Esja and the blue waters of Faxaflói Bay. The population of the city is about 120,000 (40% of Iceland’s population) in the metropolitan area and about 200,000 (60% of Iceland’s inhabitants) including its suburbs. It is growing steadily and 45% is younger than 30 years old; 83,1% of men and women aged 16-74 are active on the labour market. Reykjavík is a dynamic, modern city in harmony with beautiful nature, using renewable energy sources, geothermal power and glacial rivers. It is an International city with a lively Cosmopolitan cultural scene.

Visitors to Reykjavik experience easily the pure energy at the heart of Iceland's capital city - whether from the boiling thermal energy underground, the natural green energy within the city and around it, or the lively culture and fun-filled nightlife. Reykjavik is spread across a peninsula with a panoramic view of the mountains and the Atlantic Ocean on almost all sides.

The Cultural Night has become an essential part of cultural life in Iceland with thousands of people strolling the streets of the city on this exciting and eventful night. The Cultural Night offers the chance to enjoy a variety of activities ranging from traditional shows and exhibitions to more unusual happenings. The immensely popular Reykjavik Marathon takes place on the same day.

EXTRAS: Participation fee EUR150. Passes to access free of charge the city’s seven geothermal swimming pools and beach, bus passes to ride on the transport network of the capital area and surrounding and the chance to live at the northernmost capital city in the world! Excursions and hikes will be organised for the volunteers during their free time.