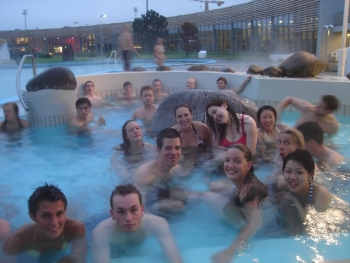 Ask for more information
From 23.07.2008 to 06.08.2008
Type: Environmental / Arts
Number of volunteers: 16
Language: English - high proficiency is not required
Accomodation: Reykjavík City Hostel camp site; volunteers shall bring their own tents
Participation fee: 150 EUR
Extra: Access free of charge the city's seven swimming pools. And of course the chance to live at the northernmost capital city in the world and one of the smallest!

WORK/PROJECT: SEEDS volunteers participating in this project will be part of the first SEEDS photo marathon in the Icelandic capital! One of the main objectives of the project is to try to deliver strong messages and draw the attention to the local population through pictures and photos made during the camp! SEEDS coordinators and jury will have prepared few different topics on which the participants will have to base their entries to the competition; those topics will be mainly related to the main areas of work of SEEDS: Environment and intercultural understanding.

Participants need to take their own digital cameras and its main work will be walking all around the city and taking photographs on the issues given; the best pictures will be selected by a committee appointed by SEED. Putting up an exhibition will be the last part of the project for the volunteers. The exhibition will be hosted at the Tjarnarsalur at the Reykjavík City Hall, one of the most visited galleries and venue for exhibits in the country!

Additional work performed by the volunteers may be done for the city of Reykjavík; working on the public recreational areas of town; and it would include the green areas and parks of the city.

LOCATION: Reykjavík, the Icelandic capital, has been called Europe’s hottest capital. Slick advertising campaigns have championed the city’s famed nightlife. But there is more to Reykjavik than pubs and clubs. Reykjavík held the prestigious title European City of Culture in the year 2000; a welcome recognition of the energetic and colourful cultural life of the capital.

EXTRAS: Participation fee EUR150. Volunteers will get passes to access free of charge the city’s seven swimming pools. And of course the chance to live at the northernmost capital city in the world and one of the smallest! Please bring your own digital camera!! SEEDS will not provide films for volunteers without a digital camera.