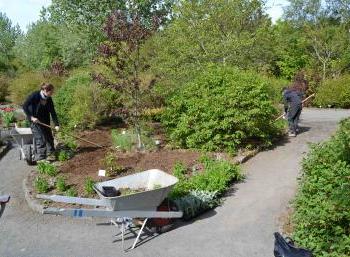 Ask for more information
From 12.05.2013 to 25.05.2013
Type: Environmental
Number of volunteers: 6
Language: English will be the official language in the camp; high proficiency is not a requirement.
Accomodation: SEEDS volunteers will stay in a well equipped house, in a beautiful setting inside the Botanical Gardens of the city of Reykjavík, which are located about 4 kilometres from the centre of the city. Volunteers will be sleeping in shared rooms/dorms in a sle
Participation fee: 180 EUR
Extra: Excursions (Blue Lagoon, Golden Circle, South shore, etc.) arranged for SEEDS at discount fares.

WORK/PROJECT: For the third year in a row SEEDS offers projects in the Botanic Garden in Reykjavík.  The Botanic Garden is an outdoor collection of living plants, founded in 1961 and celebrated its 50th anniversary in 2011. The garden’s main role is to conserve plants for education, research and delight. It conserves some 5000 plant species in eight plant collections. The collections give an idea of the enormous diversity of vegetation in the northern temperate zone. In summer there is a variety of events in the Botanic Garden and group receptions are available throughout the year.

SEEDS volunteers will be doing general garden work in the garden, attending the flowers, trees and other plants. Volunteers will assist in organising and carrying out special events that might be planned with a short notice but they will all be related to the general aim and work of the garden. The project starts early every week day, working hours are from 8:00 - 15:30, so volunteers have to be motivated to work early in the morning.

ACCOMMODATION:  SEEDS volunteers will stay in a well equipped house, in a beautiful setting inside the Botanical Gardens of the city of Reykjavík, which are located about 4 kilometres from the centre of the city. Volunteers will be sleeping in shared rooms/dorms in a sleeping bag accommodation. Please bring your own sleeping bag.

LOCATION: The population of Iceland’s capital Reykjavik is over 200,000 including the metropolitan area, so two thirds of Iceland’s inhabitants live here. It is a dynamic, modern city which lives in harmony with beautiful nature, using renewable energy sources - geothermal power and glacial rivers.

Reykjavik is often called “the nightlife capital of the North”. But there is more to Reykjavík than pubs and clubs. Reykjavík also gathers the most interesting of Icelandic culture. It is an incubator of new ideas and styles which often indicates new global trends. It is an International city with a lively Cosmopolitan cultural scene surrounded with beautiful nature.

In the area closer than 100 km from Reykjavík, there are several spectacular waterfalls, geysers, impressive coastline and the well-known geothermal Blue Lagoon spa to visit.

In the summer, you can sit by the harbour at midnight and watch the sun dip slightly below the horizon before it makes its way up again.

Volunteers have to bring good working shoes and clothes, even though summer is coming, it might still be cold and hats and gloves might be necessary.