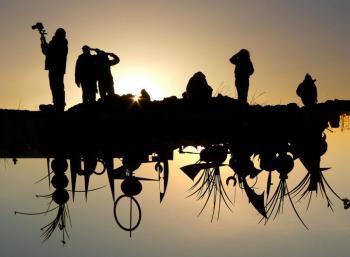 Ask for more information
From 08.05.2013 to 17.05.2013
Type: Festival / Arts
Number of volunteers: 10
Language: English will be the language in the camp; good conversational skills are needed.
Accomodation: Volunteers will be sleeping in shared rooms in a sleeping bag accommodation. Please bring your own sleeping bag.
Participation fee: 200 EUR
Extra: Tours and excursions (Golden Circle, Blue Lagoon or South Shore) will be arranged for SEEDS volunteers at discount fares.

WORK/PROJECT: The Reykjavik Shorts & Docs Festival is a film festival that strives to maintain the cultural fulfilment and expectations of the general public, as well as serving as an inspiring event for the audio-visual sector.

The year 2013 is the 11th year the Reykjavík Shorts & Docs Festival takes place. The festival is constantly growing and this year film industry professionals are joining it from all over the world. The festival takes place during 8 days from the 9th to 16th May. It includes afternoon and evening screenings, morning workshops, master-classes, panel discussions and competitions.

This is a great opportunity for volunteers to get first-hand experience of the film industry, watch film screenings and gain experience on how film festivals are run. Furthermore volunteers will be able to join in some of the festival parties, receptions, opening and closing ceremonies.

ACCOMMODATION:  SEEDS volunteers will stay in a well equipped house in down town Reykjavík. The facilities are basic with only one shower and volunteers are expected to show consideration for their companions. Volunteers will be sleeping in shared rooms in a sleeping bag accommodation. Please bring your own sleeping bag.

The world’s northernmost capital bridges the Atlantic, between Europe and North America. Reykjavík is spread across a peninsula with a panoramic view of the mountains and the Atlantic Ocean on almost all sides. The population of the city is over 200,000 including the metropolitan area, so two thirds of Iceland’s inhabitants live here. It is a dynamic, modern city which lives in harmony with beautiful nature, using renewable energy sources, geothermal power & glacial rivers.

In May the days are getting longer and the night shorter giving Reykjavik a summer glow. In the area closer than 100 Km from Reykjavík, there are several spectacular waterfalls, geysers, impressive coastline and the well-known geothermal Blue Lagoon spa to visit.

LANGUAGE: English will be the language in the camp; good conversational skills are needed.

EXTRAS / SPECIAL REMARKS: Participation fee EUR 200 (Euros) to be paid to SEEDS. Please note that the fees are to be paid on arrival in Euros or Kronur and they include full board and lodging (food and accommodation) for the whole duration of the project.

SEEDS and/or our hosts will provide the volunteers with leisure activities in the spirit of the film festival as well as offering some sightseeing opportunities.

Tours and excursions (Golden Circle, Blue Lagoon or South Shore) will be arranged for SEEDS volunteers at discount fares.