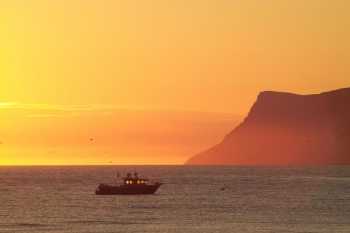 WORK/PROJECT: Volunteers will be working on mainly construction works with a group of locals, repairing and renovating an old docking pier for small boats to reach this isolated place of the country. The pier belongs to an old abandoned farm that has been renovated to offer researchers, other volunteers and visitors the opportunity to stay overnight in this inhabited area. Additional work can be performed in the old farm building house and some old hiking trails in the area.

ACCOMMODATION: Volunteers will stay in the old farm house, sharing rooms and sleeping on mattresses on the floor. Bringing a warm sleeping bag is highly suggested. Food will be provided and the duties of preparing and cooking the meals will be shared among the volunteers.

LOCATION: One of the last wildernesses of Europe, the Hornstrandir Nature Reserve can be reached only by boat. It was established in 1975, its boundaries are in the Skorarheiði moor between the fjords of Hrafnsfjörður and Furufjörður. The Reserve area thus covers the Hornstrandir region, part of the Jökulfirðir fjords and part of the district of Grunnavíkurhreppur.

Social changes resulted in the abandonment of all farms during World War II and in the post-war period. The land is mostly private property and the landowners are entitled to its traditional utilisation, i.e. eider farming, fishing in rivers and lakes, hunting birds and gathering eggs. A few dozen houses are located within the Nature Reserve area, both old, renovated farmsteads and new cottages. People often spend the whole summer in these houses, and it is important that tourists refrain from pitching their tents too close to them.

Through the ages, nature and human life in Hornstrandir were closely interwoven. Traditional agriculture was always limited; instead, the inhabitants based their livelihood on the sea and bird-cliffs. Trips between farms were difficult, during the wintertime. Outlaws travelled to Hornstrandir in order to board foreign ships and leave the country. As a result of these conditions, the history of the region assumes a depth which gives an added dimension to visits to the Nature Reserve. The primary factor that made farming in Hornstrandir different from that of other parts of the country was the struggle with the bird-cliffs. The cliffs were an important source of food, but their utilisation was hazardous. The main basis of livelihood was fishing and fish processing, but all that ended in 1962 when the last inhabitants abandoned the area and left the Jokulfiord area totally desolated.

The simplest way to approach the area is by boat from the west (from Bolungarvík or Ísafjörður) or from the east (from Norðurfjörður or Hólmavík). There are no road connections to the area.

Volunteers are welcome to explore the area on foot as long as they do not cause any damage to the flora, fauna, soil or man-made structures. Traversing the area on horseback is not allowed and motor vehicles are prohibited. Everything brought into the area has to be taken out again. The camping grounds should always be left in the same condition as it was on arrival.

STUDY THEME: Environmental messenger in the project. S/he will be in charge of delivering ecological and global education messages to both, International volunteers and local hosts through organised activities as workshops, presentations, simulations, discussions, games on topics related to environment, nature protection and sustainability as use of resources, globalisation, millennium development goals, global warming, fair trade, recycling, consumption, etc. We intend to raise awareness and to encourage the participants to undertake simple but easy-to-implement actions which will affect the way we deal with the environment and the world we live in.