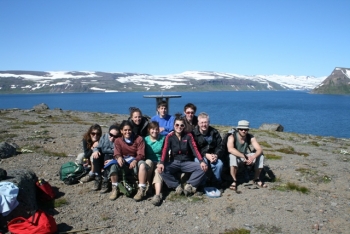 Ask for more information
From 17.08.2008 to 31.08.2008
Type: Environmental / Construction
Number of volunteers: 12
Language: English - high proficiency is not required
Accomodation: In a local summer house
Participation fee: 150 EUR
Extra: Excursions, kayak trips in the fjord and a visit to the area and pool in Krossnes.

WORK/PROJECT: The main tasks to be developed are maintenance of hiking trails and walking paths in the area as putting up sticks and signs to mark them, cleaning up actions in the old buildings of the herring factory, helping during the set up of a historical exhibit of the area, building a stone wall for one of the old houses, cleaning the coastline between Djúpavíkurkleif and Stekkjarness and perhaps some gardening works.

ACCOMMODATION: Volunteers will be hosted in a local summer house, sleeping on bunk beds; bringing an sleeping bag is needed. Food ingredients will be provided and a kitchen will be available, volunteers will share the duties of preparing and cooking meals.

LOCATION: Djúpavík is a small village in the North-West of Iceland. It is located at the head of Reykjarfjörður on the Strandir coast in the Westfjords region (Vestfirðir), in the municipality of Árneshreppur. Perhaps one of Iceland's most remote areas, it is a sheltered bay in a remote region, largely untouched by modern developments where silence reigns and nature continues to shape a rugged, mountainous landscape. The distance from the capital is around 360 km.

You can hardly get further away from the bustle of the towns to enjoy life in the beautiful and peaceful landscapes of this remote area. The bay Djúpavík is among the most remote and least frequented parts of the country. The roads up there are only open during the few months of the short summer; it is one of the remotest corners of Europe, where towering rock buttresses plunge precipitously into the icy sea and the coastline is strewn with vast expanses of driftwood that originated on the other side of the Arctic Ocean, in Russian Siberia; the region is stunningly beautiful and somewhere to really experience Iceland’s rawness close-up.

There has been small farming communities in the district for hundreds of years, but the story of Djúpavík really began in 1915, when Elías Stefánsson started a herring salting station; that worked until 1919 when he went bankrupt; then a herring factory built in 1934 changed the lives of the people for a few years until the last big catches were landed about 20 years later.. After some unsuccessful attempts to use the factory for other purposes, it was finally closed in 1954.

Djúpavík is dominated by the huge carcass of its old herring factory and the rusting hull of the 100-year-old former passenger and cargo ship Suðurland. When the herring industry was at its height in the mid-1940s, hundreds lived in this remote outpost, women salting the fish, men turning the remains into animal meal and oil. The factory went bankrupt following a disastrous collapse in fish catches, but the enormous costs involved in demolishing the building – once the largest concrete structure in Europe – means that its hulking hollow shell remains, reminiscent of a Hollywood film set.

The factory is a grand reminder of past ambitions and great expectations when the Norwegian-Icelandic herring stock passed every year just North of Iceland and was fished in great quantities in Húnaflói. The phenomenon was called the "Herring Adventure". It started in the mid-thirties when the enormous factory was built, and ended in the early fifties when there was no more herring to be had on the traditional fishing grounds and the village was gradually deserted.

The beautiful village of Djúpavík, constructed around the factory, is now deserted apart from the visiting women worker's house, now converted into an all-year hotel (www.djupavik.com) and restaurant. One family lives in Djúpavík all year round and maintains the Herring Factory Exhibition which can be seen on request inside the old factory. Nobel author Halldór Laxness set his novel Guðsgjafaþula in the area following the fortunes of the herring entrepreneurs and their employees.

TERMINAL: As last years, SEEDS will organise the “minibus option”, a shared transport from Reykjavík to the workcamps and vice versa, which apart from being cheaper and more convenient, allows volunteers to meet fellow campers and have a relaxed trip to the project site, while stopping on the way for interesting and tourist sites. Closest International Airport: Keflavík (Reykjavík), KEF. Closest bus terminal in Hólmavík.

EXTRAS: Participation fee EUR150. Excursions are planned for SEEDS’ volunteers, kayak trips in the fjord and a visit to the area and pool in Krossnes, among other recreation activities.