SEEDS 19. Revegetation in the south of Iceland (1:2)
South West 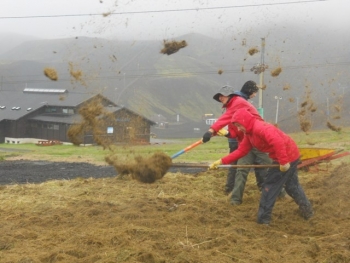 WORK/PROJECT: Since 2007, SEEDS has been working with few other NGOs devoted to the revegetation of eroded soils in the south west part of Iceland. The aim of the project is to halt the downward spiral of erosion and to strengthen the ecosystems by enhancing its natural vegetation.

By using organic waste materials for fertilizing we aim for a double dividend. The soils, poor in plant nutrients, are enriched while the amount of materials in need for a waste treatment is substantially decreased. The south west is part of the volcanic belt of Iceland envisaged by vast lava fields and easily erodible volcanic soils. On top of that the area has suffered from overgrazing of sheep for a long time. Consequently the ecological condition is rather poor and some areas are stripped entirely of top soil.

Close to 70% of the total population lives in this part of Iceland with the capital Reykjavík and neighbouring municipalities making up the bulk of the population. Different kinds of organic waste materials are being generated in and from the urban environment, substantial quantities every year. In the long run stuff like horse manure, garden waste and the likes are the best revegetation means available. We work to make way for these materials as a revegetation medium.

In this project we combine professionalism with idealism. The results so far can already be seen at a number of sites in the area and since 2007 with an important contribution from SEEDS volunteers.

In 2011 SEEDS volunteers will basically perform three different types of work: a) Revegetation and erosion control, b) Monitoring the survival and growth of tree plantations of former years. c) Tree planting. Volunteers will likely be working hand-in-hand with Icelanders of similar age.

ACCOMMODATION: Volunteers will be lodged in a house with basic facilities in one of Reykjavik´s neighbouring towns, Hafnarfjörður. We will sleep on mattresses and shall bring a sleeping bag.

Food ingredients will be provided, a kitchen will be available, we will share the duties of cooking and cleaning. Do not forget traditional food from your country for the international evening.

LOCATION: The work will take place in the vicinity of Reykjavik, and the groups will touch upon more than one project in more than just one place. The main emphasis will be on erosion control in an area on the banks of Kleifarvatn, the big lake of the Reykjanes peninsula.

The Reykjanes, peninsula at the south-western end of Iceland is located near the capital and most travellers to Iceland land in the area: As the Reykjanes coastline draws closer and the plane prepares to land at Keflavík Airport, the peninsula is marked by active volcanism under its surface, and large lava fields allow little vegetation. There are numerous hot springs and sulphur springs in the southern half of the peninsula, around the Kleifarvatn Lake and the Krýsuvík geothermal area where hot springs spewing water and mud dominate the landscape. The Peninsula is envied for its long & short hiking trails that zigzag through the region where colorful landscapes and their contrasts delight the visitor. Amazing ocean cliffs, (up to 70 m high) are nested by numerous bird species, often a wonderful spot for bird and whale watching.

There is also a geothermal power station at Svartsengi, where a pool has been installed using the hot and mineralized water coming down from the station; it is known as the "Blue Lagoon". The Leif the Lucky Bridge spans the Álfagjá rift valley (60 feet wide and 20 feet deep) near Grindavík that marks the boundary of the Eurasian and North American continental tectonic plates, named after Icelandic explorer Leif Eriksson who travelled from Europe to America 500 years before Columbus.

Excursions to the Blue Lagoon, South of Iceland and a weekend stay away from the project (likely to the largest National Park in Europe: Skaftafell/Vatnajökull National Park) will be organised.