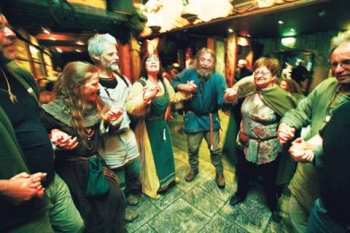 Ask for more information
From 04.06.2007 to 20.06.2007
Type: Festival / Heritage
Number of volunteers: 8
Language: English
Accomodation: Local house
Participation fee: 140 EUR
Extra: Excursions and free time activities will be arranged for volunteers. Transport from Hafnarfjörður to the countryside and back included.

WORK/PROJECT: Volunteers will be active during the whole stages of the Viking festival, helping during the preparation, the festival itself and after it has finished. During the festival all volunteers will receive Viking typical costumes to wear and perform different tasks. Diverse types of tasks may be performed as control at the venues, assistance to visitors, and help to the “real” Viking volunteers in the kitchen or serving the meals.

The festival will take place partly in Hafnarfjörður and partly in another location in the Northern Icelandic countryside. It starts on June 8th and last until June 17th. Apart from SEEDS “Vikings” there will be around 100 more Viking volunteers (Norsemen) coming from all around the world! A colourful collection of artists will be at the Festival: artists, warriors, bowmen, wrestlers, woodcarvers, stonemasons, blacksmiths, storytellers and enchantresses, musicians and magicians.

Volunteers shall be aware of quiet times during the festival, with few visitors; then they can have free time but cannot leave the Viking compound and shall still wear the typical costumes.

ACCOMMODATION: Volunteers will be lodged in a house inside the Viking compound, while in Hafnarfjörður, sleeping on mattresses on the floor. A warm sleeping bag is highly suggested, especially for the 4-5 days in the countryside, where we will sleep in tents. SEEDS volunteers will share the facilities with the other Viking volunteers.

LOCATION: Hafnarfjörður takes its name (meaning Harbour-fjord) from the area's excellent natural harbour and it is located 10 kilometres away south from the capital, Reykjavík. The town is first named in the medieval "Book of Settlements," and the earliest reports of voyages to Hafnarfjörður date from the end of the 14th century. Englishmen began trading in Hafnarfjörður in the 15th century, but German merchants followed in their wake and eventually drove the English out. After that, Hanseatic traders prevailed in town until 1602, based at Hvaleyri. At this point, the Danish monarchy established a Danish trade monopoly in Iceland which lasted until late in the 18th century. During this period, Hafnarfjörður was the nation's busiest trade centre.

Today, Hafnarfjörður is one of the nation's largest fishing centres and the site of Iceland's first fish wholesalers' auction market. Through the years, Hafnarfjörður's dynamic local economy has been strongly linked to fishing, although freight transport has recently become the major harbour activity.

It is Iceland’s third-largest town, with just over 23,000 residents. And yet that number is open to debate, since legend has it that some of Iceland’s elves and hidden people live in Hafnarfjördur’s lava cliffs and rocks, in peaceful coexistence with the town’s human residents. In fact, it is possible to tour the elf lands, and those with second sight may even be lucky enough to spot one or two!!

The last country in Europe to be inhabited by the human race, it was the Vikings who started to settle Iceland around 874 AD. During the annual Viking Festival modern-day Icelanders and visiting Vikings from abroad celebrate their heritage with appropriate vigour. The Vikings' wild and adventurous spirit lives on today, in the people of this unique country. The event is a lot of fun; there are displays of ancient arts and crafts, and large gruff men in full Viking attire demonstrate their ancient battle skills to anyone brave enough to challenge them.