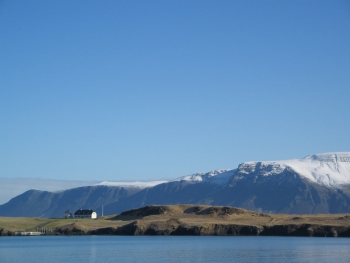 Ask for more information
From 13.07.2007 to 27.07.2007
Type: Environmental
Number of volunteers: 12
Language: English
Accomodation: Local house
Participation fee: 140 EUR
Extra: Excursions (as whale watching tours) and free time activities in the area will be arranged for the volunteers. Volunteers will have free rides in the boat/ferry to the city of Reykjavík during their free time.

WORK/PROJECT: Volunteers will be living and working on the island of Viðey*, the city of Reykjavík will be our host and we will work on environmental or nature related matters. Most of the project will be dedicated to coastline cleaning up actions. The island is located not far away out of the capital’s coast and sea currents bring considerable amounts of trash to its shores. Depending on the advance of the project, volunteers may have other possible tasks as maintenance and marking of hiking paths or bicycle trails, putting up of signs in noteworthy places; as works on common and green recreational areas, gardening works, etc.

ACCOMMODATION: Volunteers will be hosted in a local house; sleeping on mattresses on the floor; therefore bringing a warm sleeping bag is highly recommended. Food ingredients will be provided and volunteers will share common duties as preparing and cooking meals, among others.

LOCATION: Viðey is the largest island of the Kollafjord Bay (1,7 km²) with its highest point rising 32 m above sea level. It is divided by a short isthmus and the western part is called The West Island (Vesturey). The large part, with the church and Viðeyjarstofa (Viðey House), is called The Home Island (Heimaey) and the southeastern part is called The East Island (Austurey). The island is of volcanic origins and was formed about 2 million years ago; several spots on the island depict beautiful basaltic columns, while it is well vegetated and boggy in places. About 156 species of higher plants have been found on the island and the avifauna is highly interesting. At least 30 species of breeding birds have been counted, the most common ones are eiders and the lesser black backed gull. Archaeological excavations have disclosed the fact, that the island was inhabited already in the 10th century. In the 12th century a church was built on the island and in 1225 an Augustine monastery was established there, which was a centre for pilgrimage in the Middle Ages until it was abolished in 1539 after the reformation had started in Iceland.

There are hiking and cycling paths around the island and there is no motor traffic allowed. It also inhabits intriguing sculptural art work, amongst them “Blind Pavilion” by artist Olafur Eliasson and all nine pairs of basalt pillars that comprise Richard’s Serra’s work Áfangar. The island has been subject of interest lately, both regarding Yoko Ono’s ideas of raising a peace column on the island and the potential moving of Reykjavik City Museum-Arbaejarsafn (an open-air folk museum) to the island.

Other places of interest on Viðey are related to archaeological research, the villageAt the eastern end of the island is the site of the abandoned fishing village and Viðeyjarnaust, at the southwest of the island, it is a memorial to the twenty men who lost their lives when the cutter Ingvar sank off Viðey in 1906. Dramatic formations of columnar basalt may be seen on the shore.

* Viðey, the name of the island is translated into English as “Wood Island”. For information on Reykjavík please see the description of our project SEEDS 14. RIFF – Reykjavík International Film Festival.