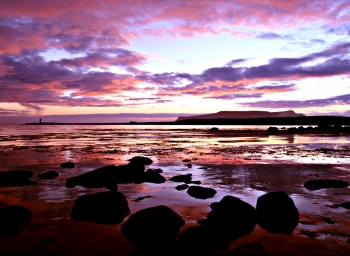 Ask for more information
From 04.07.2007 to 18.07.2007
Type: Environmental
Number of volunteers: 12
Language: English
Accomodation: Local sports centre
Participation fee: 80 EUR
Extra: Access to the local sports centre. Excursions in the area will be arranged for volunteers by our local host. Please expect plenty of Icelandic mountain (organic) lamb, cod and haddock in the menu! Vegetarians are however easily catered.

WORK/PROJECT: The administration authorities of the Norðurþing district will be our host again and we will be working on environmental related matters. One of the biggest pollution issues, in the North East of Iceland, is the litter and waste brought to the shore due to sea currents that bring timber even as far as from Siberia. Volunteers' work will be mainly focused on cleaning up the shores and beaches in the area. Additional work will be undertaken in the district, taking down old fences used for cattle and farming. If accomplished the two tasks mentioned, then we may work on gardening, reforestation tasks as marking some walking paths and hiking trails. Volunteers will be working in the areas surrounding the towns of Kópasker * and Raufarhöfn.

ACCOMMODATION: Volunteers will be hosted in the local sports centre in Kópasker part of the time and the rest of the stay in a local house. We will sleep in shared rooms on mattresses on the floor; bringing a warm sleeping bag is highly recommended. Food ingredients will be provided and a kitchen will be available, volunteers will share the duties of preparing and cooking meals.

LOCATION: The Norðurþing district, located in the North east of Iceland (region Norðurland eystra) was formed in the year 2006 after joining together the city district of Húsavík (isl. Húsavíkurbær) with the country districts of Keldunes (Kelduneshreppur), Öxarfjörður (Öxarfjarðarhreppur) and Raufarhöfn (Raufarhafnarhreppur). It comprises an area of approx. 3800 km² and around 3000 people live in the whole district; around 125 in Kópasker and 235 in Raufarhöfn.

This part of the country is a great place to visit. Some of Iceland's most precious pearls of nature are found there. On the web site (www.detifoss.is) a part of the area is described which reaches from Jökulsá á Fjöllum to the northest point of the country on Melrakkaslétta (Arctic Fox Plain). Dettifoss is probably the best known Icelandic waterfall and the most powerful in Europe.

Natural beauty is characteristic for the area, alongside a flourishing countryside where agriculture is the main industry while fishing, fish processing and commerce are the main bases of livelihood. As you look over the fjords you will notice a few mountains each shaped in its own way, silent reminders of the countries more violent geological history. Farther east you will become aware of how the sea must have been an unforgiving neighbour at times and shaped the lives of the people living along the coast here. A mysterious but yet fascinating place to go as you wont get any farther north than on Melrakkaslétta, where you will find the two northernmost points of Iceland namely Rif and Hraunhafnartangi. Melrakkaslétta is also a bird watchers paradise.

The distance between Kópasker and Reykjavík is about 620 Km, in the town you will find all the services such as a convenience store, gas station, guest house, camping site, post office, a bank, a garage etc.. From Kópasker to Raufarhöfn there are further 55 Km, the town of Raufarhöfn is the northernmost town of Iceland, lying just 3 Km south of the Artic circle.

* Kópasker: The name of the town means "seal pup reef" or "seal scub skerry". Most days one can see seals and their cubs basking on skerries or surfacing briefly to observe the people. Nearly every day you can see seals swimming in the ocean along the shoreline, or laying on rocks just a stones throw from shore.