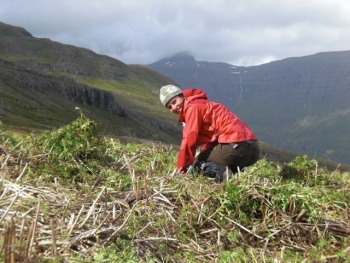 Ask for more information
From 19.06.2010 to 03.07.2010
Type: Renovation / Environmental
Number of volunteers: 10
Language: English - high proficiency is not required
Accomodation: In Reykjavík - in a fully equipped house; sleeping in shared rooms in own sleeping bags. In the National Park in shared tents.
Participation fee: 180 EUR
Extra: Great combination: Isolated places of extreme beauty and the capital of Iceland!

WORK/PROJECT: SEEDS volunteers in this project will have the unique opportunity to work at the largest National Park in Europe, the Vatnajökull National Park and in the capital city of Reykjavík.

SEEDS Iceland will continue building the partnership with the Environmental agency of Iceland (Umhverfisstofnun) and the volunteers will support a research project on invasive species conducted by a team of scientist from the University of Iceland and the Soil Conservation Service of Iceland (Landgræðsla ríkisins). The Lupine plant (from Alaska) has been used in Iceland in order to control soil erosion and re-vegetate eroded areas; but in some places its spread is more than desirable and being a foreign specie endangers the native habitat in the National Park; the research project focuses on the use, management and control of invasive species in Iceland.

The work in Reykjavík will be varied combining different tasks ensuring diversity in experiences for participating volunteers. The idea and tasks of the project is to keep Reykjavík and its public areas lively, attractive, interesting and charming for both the locals and the guests of the city. Volunteers’ work will be focused on improvements and development of surroundings and environment all around Reykjavík. Tasks may involve house painting to cover graffiti tags, tiding up public spaces and face-lifting the city.

There may be one more challenging and exciting assignment: Volunteers will be assisting in SEEDS’ volunteer base and if needed working in the surrounding woodland and the vegetable garden. Be prepared for flexibility due to Iceland’s changeable weather.

ACCOMMODATION: Volunteers will have two different types of accommodation. In Reykjavík, they will stay in SEEDS volunteers centre, a fully equipped house; sleeping in shared rooms.

LOCATION: Part of the project will take place at the largest National Park in Europe, Vatnajökull N.P., stretching from the south coast to the north coast of the island; it is the largest protected wilderness in Europe. It covers around 15.000 km2 (15% of the surface of Iceland), including all of Vatnajökull glacier, the former Skaftafell N.P., Jokulsargljufur N.P. and surrounding area. Due to the size of the Park it is established and operated under special law, it is an autonomous government agency that requires cooperation between nine municipalities.

The other part of the project will take place in the city of Reykjavík, the capital of Iceland, often called “the nightlife capital of the north”. But there is more to Reykjavík than pubs and clubs. Reykjavík also gathers the most interesting of Icelandic culture. It is an incubator of new ideas and styles which often indicates new global trends. It is an International city with a lively Cosmopolitan cultural scene. The world’s northernmost capital bridges the Atlantic, between Europe and North America. The population of the city is over 200,000 including the metropolitan area, so two thirds of Iceland’s inhabitants live here. Reykjavík is a dynamic, modern city which lives in harmony with beautiful nature, using renewable energy sources - geothermal power and glacial rivers.

TERMINAL: Closest International Airport: Keflavík–Reykjavík, (KEF). SEEDS organises the “minibus option”, a shared transport from Reykjavík to the camps and vice-versa, which apart from being cheaper and more convenient, allows volunteers to meet fellow campers and have a relaxed trip, while stopping on the way for interesting and tourist sites.