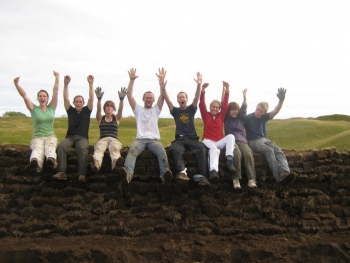 WORK & STUDY/PROJECT: SEEDS volunteers will support the construction of a natural playground in a suburban area in Reykjavík. The playground is a part of a local kindergarten and is an extension of the existing playground located in the surrounding woods.

The aim of the project is to develop a stimulating and playful area for children. The age range of the user group is 1,5 years to 15 years old. Only natural local Icelandic materials will be used for the construction: Woods, rope, turf, rocks and stones are the primary building materials.

Some of the tasks are to build turf and rock walls, challenging play structures of forest wood and ropes, making paths and planting woods and flowers.

The concept is fantasy and natural play. We will divide the project area in 5 different spaces with individual themes: area for toddlers, pirate fantasy, programmed for relaxation, forest field trip, Ecology and growth.

The work is going to be a joint volunteering effort from local people, parents and youngsters. Groups of parents will be working on practical preparation during the spring period, the most focused work will take place in the latter half of June. The opening of the playground will be greeted with a local festival, planned on Friday June 25th.

LOCATION: Reykjavík is the capital of Iceland, often called “the nightlife capital of the north”. But there is more to Reykjavík than pubs and clubs. Reykjavík also gathers the most interesting of Icelandic culture. It is an incubator of new ideas and styles which often indicates new global trends. It is an International city with a lively Cosmopolitan cultural scene. The world’s northernmost capital bridges the Atlantic, between Europe and North America. Reykjavík is spread across a peninsula with a panoramic view of the mountains and the Atlantic Ocean on almost all sides.

The population of the city is over 200,000 including the metropolitan area, so two thirds of Iceland’s inhabitants live here. Reykjavík is a dynamic, modern city which lives in harmony with beautiful nature, using renewable energy sources - geothermal power and glacial rivers.

Iceland was badly hit by the current crisis, which did affect the life for foreign visitors in a positive way, making Iceland a much cheaper country to visit, the local currency greatly lost value – many goods and services cost (in EUR) just a half comparing to the year 2007.

EXTRAS: Participation fee EUR 100. SEEDS will provide volunteers with passes to access free of charge the city’s seven geothermal swimming pools and thermal-water beach. Tours and excursions will be arranged for SEEDS volunteers at discount fares.