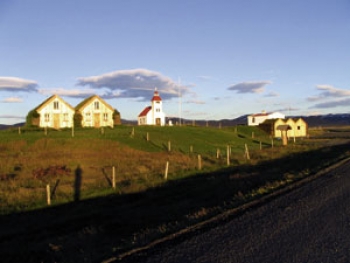 Ask for more information
From 06.06.2010 to 20.06.2010
Type: Renovation / Environmental
Number of volunteers: 8
Language: English - high proficiency is not required
Accomodation: In a house at one of the farms; a sleeping bag is not required.
Participation fee: 100 EUR
Extra: Remote places located in natural areas. Hikes arranged, possibility of horse riding.

WORK / PROJECT: SEEDS Volunteers will work in the midland, eastern from beautiful Mývatn lake and northern from the Vatnajökull glacier. Our workcamp is situated in a farm in the highlands - 469 meters above the sea level, in the North-eastern part of the country.

This area has been inhabited since the early times of the settlement and some of the highest farms in the country are in the area. As small-scale farming has turned more difficult in recent times, some of the locals have decided to combine the work with the new tourism services and push forward alternatives ways of income for the region. The extreme beauty of the area draws more and more visitors every year; especially after the Vatnajökull national park was enlarged in 1998.

Past farming work has taken its toll in the pristine landscape, SEEDS volunteers will support local farms in removing elements and machinery used in the past (e.g. old tires, old corrugated iron, fences, etc.) that have been left unattended and need to be removed in order to restore the natural and historical heritage of the region.

Volunteers will also work repairing an old turf building, restoring it to its previous ?form?, so it looks similar to the several other turf buildings in the surroundings.

Additional work for SEEDS volunteers will be fixing and maintaining walking paths and making a new trail, as fixing two bridges that were damaged by waters from the glacier-snow melting.

ACCOMMODATION: Volunteers will be lodged in a house at one of the farms, sleeping on mattresses on the floor; a sleeping bag is not needed. Volunteers will receive food ingredients and be in charge of the different cooking and cleaning activities. Equipped kitchen and washing machine are available.

LOCATION: Located in the North-eastern part of the country and in the vicinity of the largest National park in Europe, the Vatnajökull National park, which is now around 12.000 square kilometers. It is expected the national park will enlarge even further within the next few years. The region of the park is unique; one can find glaciers, volcanic activities, glacier bursts, eruptions and geothermal heat plus extremely rare landscape; for example untouched vastness.

With the establishment of Vatnajökull national park Icelanders wade into the largest nature conservation project ever proceeded in Iceland. It is also one of the largest creations of jobs and regional development the authorities have commenced in this region. The land within the national park is mostly be owned by the government, but a few privately own districts are a part of the national park.

The farms in the area are surrounded by untamed nature of supreme beauty; most of the area is unspoiled and undisturbed. Some farms have been inhabited already since early settlement.

Under the ice-cap glacier hides seven volcanoes and most of them are active. Underneath there is an ice cavern system several km long. Vatnajökull covers about 8% of the country, and is about 1000m thick where it is thickest. Mount Herðubreið, the queen of Icelandic mountains and one of the most famous in Iceland is located in the area.

TERMINAL: Closest International Airport: Keflavík (Reykjavík), KEF. SEEDS organises the ?minibus option?, a shared transport from Reykjavík to the camps and back again, which apart from being cheaper and more convenient, allows volunteers to meet fellow campers and have a relaxed trip, while stopping on the way for interesting and tourist sites.

EXTRAS: Participation fee EUR 100,- (Euros). Remote places located in natural areas of extreme beauty. Outdoor activities as hikes in the area will be arranged for SEEDS volunteers and possibility of horse riding during the project.