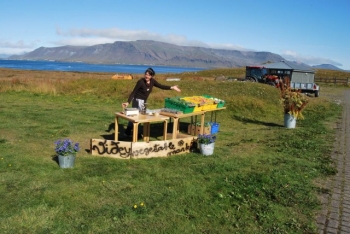 WORK/PROJECT: The city of Reykjavík will be our host again in this project and SEEDS volunteers will have the opportunity to work at the island of Viðey for the 4th year in a row! On Viðey we will work on environmental and nature related issues.

The work includes coastline cleaning, the island is located not far out of the capital?s coast and sea currents bring considerable amounts of sea waste to its shores.

Apart from the annual cleansing work at the coast, SEEDS volunteers will be preparing the island small vegetable garden as most crops planted in May or early June to be harvested during the late summer.

Additional possible works may include maintenance of paths and bicycle trails; as works on common recreational areas and painting works.

ACCOMMODATION: Volunteers will be lodged in a local house at Viðey island, sleeping on mattresses on the floor. Bringing a sleeping bag is needed. Volunteers will receive food ingredients and be in charge of the different cooking and cleaning activities. Equipped kitchen and washing machine are available.

LOCATION: Viðey or ?Wood Island? is the largest island (1,7 km²) in the Kollafjord Bay. It is covered by many species of plants and at least 30 species of breeding birds have been counted here.

The island was inhabited already in the 10th century, in the 12th a church was built and in 1225 a monastery was established. The local house, which is still open to tourists, was built in 1755 and is the first construction made of stone and cement in the country. In the beginning of the 20th century the island was inhabited by over one hundred fishermen, merchants and farmers but the last inhabitant left it in 1943. The island is unpopulated now but several people work there in a ?homey? café and lively cultural house. Both are hosting visitors in the daily hours. The city is successfully trying to change Viðey into a place known by its cultural and environmental attractions.

There is a regular boat connection between the island and the harbour of Reykjavík. It takes just about 10 minutes and is only a few hundred metres away from the city. This makes Viðey so special, it is a peaceful place, very close to the busy city life of the capital.

There are hiking and cycling paths around the island and there is no motor traffic allowed. It also inhabits intriguing sculptural art work, amongst them all nine pairs of basalt pillars that comprise Richard?s Serra?s work Áfangar and Yoko Ono?s ?Imagine peace? column, a tower of light, which is supported by the widow of John Lennon. http://imaginepeace.com/news/imagine-peace-tower.

STUDY THEME: This workcamp has an educational/awareness-rising approach to environmental, nature-protection and sustainable development topics. Apart from the leader, we will have an environmental messenger, a person dedicated to organising and developing fun, interactive and educational activities within the project.

SPECIAL REMARKS / EXTRAS: Participation fee EUR 120,- (Euros). Whale watching, puffin boat excursions and free time activities in the area will be organised free of charge for SEEDS volunteers. Volunteers will also have free rides in the boat/ferry to the city of Reykjavík during their free time.