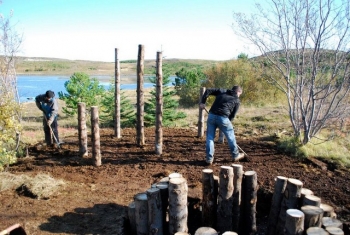 WORK & STUDY/PROJECT: SEEDS volunteers will continue the projects started last year at the surroundings of lake Reynisvatn in the outskirts of Reykjavík. The project?s goal is to establish platforms for recreational use of the local surroundings in a suburban area in Reykjavík, as to increase the outdoor use and improve the healthy lifestyle of the inhabitants.

The construction and establishments is made through participation of local people and of volunteers from SEEDS. There is a strong aspect of learning during the working process and of the social importance of the work. The project is initiated by the community group in the suburban area and sponsored by the city of Reykjavík.

The concept is to use Icelandic, natural and local materials for the landscaping and the interior, i.e. turf, soil, rocks and wood. The work brings together the locals, the young and grown-ups with SEEDS group for a cultural and learning exchange. Volunteers will receive lessons in turf cutting and turf-walling, which is a traditional Icelandic craft, then produce turf material and at one point build a turf wall. Another task will be to prepare landscape and do some of the landscape work with the local materials, ideas will be put forth but volunteers will have some say in how constructions will look like. Preparing the soil and laying a recreational path in a forest area. Volunteers may also spend some time with local youngsters in making a sculpture from the forest wood.

LOCATION: Reykjavík is the capital of Iceland, often called ?the nightlife capital of the north?. But there is more to Reykjavík than pubs and clubs. Reykjavík also gathers the most interesting of Icelandic culture. It is an incubator of new ideas and styles which often indicates new global trends. It is an International city with a lively Cosmopolitan cultural scene. The world?s northernmost capital bridges the Atlantic, between Europe and North America. Reykjavík is spread across a peninsula with a panoramic view of the mountains and the Atlantic Ocean on almost all sides.

The population of the city is over 200,000 including the metropolitan area, so two thirds of Iceland?s inhabitants live here. Reykjavík is a dynamic, modern city which lives in harmony with beautiful nature, using renewable energy sources - geothermal power and glacial rivers.

EXTRAS: Participation fee EUR 100. SEEDS will provide volunteers with passes to access free of charge the city?s seven geothermal swimming pools and thermal-water beach. Tours and excursions will be arranged for SEEDS volunteers at discount fares.