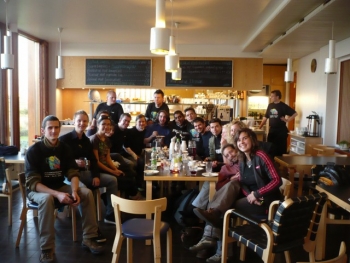 Ask for more information
From 20.09.2009 to 03.10.2009
Type: Environmental
Number of volunteers: 6
Language: English - high proficiency is not required
Accomodation: Local housing in the heart of Reykjavík
Participation fee: 150 EUR
Extra: SEEDS will provide volunteers with passes to access free of charge the city's seven geothermal swimming pools and beach. Volunteers will have the chance to live at the northernmost capital in the world and one of the smallest!

WORK & STUDY/PROJECT: The projects goal is to establish platforms for recreational use of the local surroundings in a suburban area in Reykjavik. Also to increase the outdoor use and improve the healthy lifestyle of the inhabitants.

The construction and establishments is made through participation of local people and of volunteers from SEEDS. There is a strong aspect of learning during the working process and of the social importance of the work. The project is initiated by the community group in the suburban area and sponsored by the city of Reykjavik.

The concept is to use icelandic, natural and local material for the landscaping and the interior, i.e. turf, soil, rocks and wood. The work will bring together the locals, the young and grown-ups with the participating groups for a cultural exchange and learning. Volunteers will receive lessons in turf cutting and turf-walling, which is a traditional Icelandic craft and then produce turf material and at one point build a turf wall. . Another task will be to prepare landscape work as well as doing some of the landscape work with the local materials, ideas will be put forth but volunteers will have some say in how constructions will look like. Preparing the soil and laying a recreational path in a forest area. Volunteers will also spend some time with local youngsters in making a sculpture from the forest wood.

EXTRAS: Participation fee EUR150. SEEDS will provide volunteers with passes to access free of charge the city’s seven geothermal swimming pools and beach. Volunteers will have the chance to live at the northernmost capital in the world and one of the smallest!