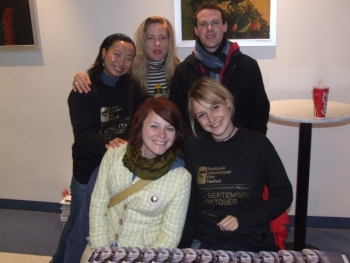 Ask for more information
From 22.09.2009 to 05.10.2009
Type: Festival / Environmental / Arts
Number of volunteers: 10
Language: English - high proficiency is not required
Accomodation: Local housing
Participation fee: 150 EUR
Extra: Volunteers will have free passes and access to all the screenings of the festival including receptions, while they are having their free time.
WORK/PROJECT: Volunteers will be part of the team working in and supervising the Nordisk Panorama ? Short and Documentary Film Festival. Volunteers will team up with the organisers and some local Icelandic volunteers. They will share all types of tasks related to the festival and the group will be split according to the needs and to give everyone the chance to try out different assignments. In the other half of the workcamp volunteers will be helping SEEDS continuing in a project we have been having with the city of Reykjavík all summer in making the surroundings more beautiful, by painting and cleaning around the city.

The input of volunteers will make a big difference in making the festival an impressive cultural event. Among the projects volunteers will be working on are; overseeing screenings of the movies, and helping in Q&A after screenings, working at the Nordisk Panorama Coffee shop located at the cinema, greeting and receiving guests at the airport, pick up VIP guests at the airport, assisting in different evening events like controlling at the entrances as well as assisting in other events, setting up venues and a variety of other important things to keep the festival running smoothly. Volunteers are an integral part of creating a special festival atmosphere in Reykjavík.

The tasks are very exciting for volunteers interested in films, since we try to give them insight into the working process for a film festival whilst also offering a chance to experience a fun job in a creative atmosphere. More details on the festival can be found at http://nordiskpanorama.com/

ACCOMMODATION: Volunteers will be lodged in a local housing. There will be bunk beds or mattresses on the floor and all facilities needed. Food will be provided, so cooking and common tasks will be shared fairly among the participants. A warm sleeping bag is highly recommended.

LOCATION: Reykjavík*, the Icelandic capital, has been called Europe?s hottest capital. Slick advertising campaigns have championed the city?s famed nightlife. But there is more to Reykjavik than pubs and clubs. Reykjavík held the prestigious title European City of Culture in the year 2000; a welcome recognition of the energetic and colourful cultural life of the capital. The world?s northernmost capital bridges the Atlantic, between Europe and North America, is framed by the majestic Mt. Esja and the blue waters of Faxaflói Bay. The population of the city is about 115,000 (40% of Iceland?s population) in the metropolitan area and 180,000 (60% of Iceland?s inhabitants) including its suburbs. It is growing steadily and 45% is younger than 30 years old; 83,1% of men and women aged 16-74 are active on the labour market. Reykjavík is a dynamic, modern city in harmony with beautiful nature, using renewable energy sources, geothermal power and glacial rivers. It is an International city with a lively Cosmopolitan cultural scene.

Nordisk Panorama - 5 Cities Film Festival has for several years been a vital stop on the international film festival circuit - famous for its´ cultural importance and creativity, and recognized as a good place to find new, soulful, cutting-edge work. Taking the pulse on the current Nordic short film & documentary scene, the festival creates a vibrant meeting-point for filmmakers, distributors, financiers and audience alike! Since 1989 the festival has rotated annually between the five Nordic countries Sweden, Iceland, Norway, Denmark and Finland and this years festival host city is Reykjavik in Iceland. Last year Nordisk Panorama was held in Malmö, with about 800 international film professionals and over 5000 festival visitors.

SPECIAL REMARKS / EXTRAS: Participation fee EUR 150,-. Volunteers will have free passes and access to all the screenings of the festival including receptions, while they are having their free time.