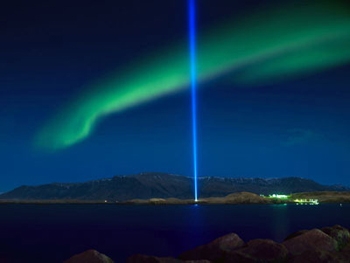 Ask for more information
From 15.09.2009 to 29.09.2009
Type: Festival / Environmental
Number of volunteers: 10
Language: English - high proficiency is not required
Accomodation: Local housing
Participation fee: 150 EUR
Extra: Whale watching, puffin boat excursions and free time activities in the area will be organised free of charge for the volunteers. Volunteers will also have free rides in the boat/ferry to the city of Reykjavík during their free time.

WORK/PROJECT: Volunteers will be living and working on the island of Viðey by Reykjavík. The group will mainly work on the preparations for the lighting of the Imagine Peace tower on the island; which is an outdoor work of art conceived by Yoko Ono in memory of John Lennon. Diverse tasks will be done as coastline cleaning, maintenance and marking of hiking paths or bicycle trails, putting up of signs in noteworthy places; as works on common and green recreational areas, gardening and painting works, etc.

The artwork was dedicated to John by Yoko at its unveiling on Oct. 9 2007, Lennon’s 67th birthday. It symbolizes Lennon’s and Ono’s continuing campaign for World Peace, which began in the 1960s. The tower is composed of a tall shimmering tower of light that will appear every year and be visible from Oct. 9 (John’s birthday) until December 8 (the anniversary of his death). In addition, it will illuminate from Winter Solstice (Dec. 21st - 28th), on New Year’s Eve (Dec. 31st) and the first week of spring (March 21st -28th). It is lit from 2 hours after sunset until midnight, and until dawn on New Year’s Day. http://imaginepeace.com/news/imagine-peace-tower

ACCOMMODATION: Volunteers will be lodged in a local house, sleeping on mattresses on the floor; a warm sleeping bag is suggested. Food ingredients will be provided and volunteers will share common duties as cooking the meals, among others.

There are hiking and cycling paths around the island and there is no motor traffic allowed. It also inhabits intriguing sculptural art work, amongst them all nine pairs of basalt pillars that comprise Richard’s Serra’s work Áfangar and Yoko Ono’s peace column. The island has been subject of interest lately, regarding the potential moving of open air folk-museum Arbaejarsafn to the island.

SPECIAL REMARKS / EXTRAS: Participation fee EUR 150,- (Euros). Whale watching, puffin boat excursions and free time activities in the area will be organised free of charge for the volunteers. Volunteers will also have free rides in the boat/ferry to the city of Reykjavík during their free time.