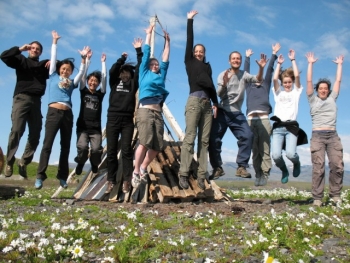 Ask for more information
From 18.08.2009 to 01.09.2009
Type: Festival / Environmental
Number of volunteers: 10
Language: English - high proficiency is not required
Accomodation: Local housing
Participation fee: 150 EUR
Extra: Whale watching, puffin boat excursions and free time activities in the area will be organised free of charge for the volunteers. Volunteers will also have free rides in the boat/ferry to the city of Reykjavík during their free time.

WORK/PROJECT: The city of Reykjavík will be our host again and we will work on environmental and nature related issues, as during the happenings of the Culture Night in the city. The work on Viðey includes coastline cleaning, maintenance of paths and bicycle trails; as works on common recreational areas, gardening and painting works. Volunteers will support harvesting of vegetables and crops grown in the island and the festival organised around this events on August 29.

SEEDS volunteers will also be part of the happenings of Menningarnótt (The Culture Night) on August 22. Menningarnótt is a yearly event held and SEEDS volunteers have been engaged since 2006. It was created by the Reykjavík city council, and has now become the largest festival in Iceland, rivalling the celebration of Iceland's national day on June 17th.

During Culture Night a carnival atmosphere reigns. The festival consists of a main stage in the centre and many smaller events spread over the city. The highlight is an outside concert by 3-4 of the most popular musicians in Iceland followed by a glamorous fireworks show. SEEDS volunteers are part of making the centre vibrant with miscellaneous, creative and colourful events.

ACCOMMODATION: Volunteers will be lodged in a local house at Viðey island, sleeping on mattresses on the floor; a warm sleeping bag is suggested. Food ingredients will be provided and volunteers will share common duties as cooking the meals, among others.

There are hiking and cycling paths around the island and there is no motor traffic allowed. It also inhabits intriguing sculptural art work, amongst them all nine pairs of basalt pillars that comprise Richard’s Serra’s work Áfangar and Yoko Ono’s peace column http://imaginepeace.com/news/imagine-peace-tower

SPECIAL REMARKS / EXTRAS: Participation fee EUR 150,- (Euros). Whale watching, puffin boat excursions and free time activities in the area will be organised free of charge for the volunteers. Volunteers will also have free rides in the boat/ferry to the city of Reykjavík during their free time.