SEEDS 34. The path to the volcanoes - West of Iceland
South West 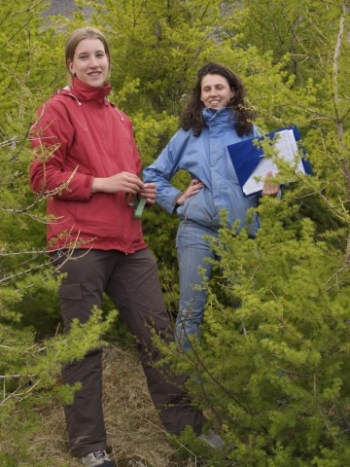 Ask for more information
From 12.08.2009 to 26.08.2009
Type: Environmental / Construction
Number of volunteers: 8
Language: English - high proficiency is not required
Accomodation: Local school
Participation fee: 150 EUR
Extra: Guided hikes around the beautiful surroundings will be arranged for SEEDS volunteers. Free access to the fitness centre, gym, sauna and hot tubs/Jacuzzis; as to the leisure time rooms with ping pong and billiard for a nice stretch after a hard working day

WORK/PROJECT: SEEDS volunteers will be mainly working on the construction and maintenance of the trails and paths leading to few volcano craters and a lava field in the district of Borgarfjörður, West of Iceland. Well maintained paths enable people to visit this amazing areas without damaging it and this important work also helps to improve safety for visitors.

The lava fields located in the district of Borgarfjörður were formed about 3.000 years ago, and right now are partly covered with moss and birch bushes. The lava came from diverse craters and our work will be focused on the paths to the 3 main craters; which lay along a 600 m long fissure. It is an area full of interesting sights, within walking distance from the volunteers’ accommodation.

Additional work will be performed in the local community according to the advance in the trails; the jobs in the community include diverse jobs in the green and public areas.

ACCOMMODATION: Volunteers will be lodged in a local school in the. Volunteers will sleep on mattresses and shall bring a warm sleeping bag. Food ingredients will be provided and a kitchen will be available, volunteers will share the duties of preparing and cooking meals.

LOCATION: Borgarfjörður is a fjord in the west of Iceland near the town of Borgarnes. Borgarbyggð is a municipality in Vesturland region of Iceland. The biggest town in the municipality is Borgarnes, with a population of 2000. The waters of Borgarfjörður appear to be calm; however the fjord is on the contrary a rather dangerous part of the sea because of its undercurrents and shallows. There are many flat islands lying in the fjord, but for the most part they are uninhabited.

The land around the fjord has been inhabited since the time of Icelandic settlement. Events in the Icelandic sagas such as that of Egill Skallagrímsson are situated here. The name of the fjord seems to come from the farm of Borg, which according to the sagas was founded by Egill's father Skallagrímur, who took the land around and accordingly gave the fjord the name of Borgarfjörður.

Unlike most other coastal settlements, Borgarnes isn’t dependent on fishing – powerful tidal currents in the fjord have put paid to that – but is primarily a service centre for the surrounding dairy farmers who rely on the town’s slaughterhouse and good roads for their livelihoods. However, the town’s main claim to fame is its historical association with the ninth-century settler, Skallagrímur Kveldúlfsson, father of the pirate, thug and poet Egill Skallagrímsson, hero of Egill’s Saga. Their lives and times are explored in a first-rate museum, while plenty of Borgarnes’ streets recall characters from the saga: Skallagrímsgata, Kveldúlfsgata, Böðvarsgata, Egilsgata, etc.

TERMINAL: Closest International Airport: Keflavík (Reykjavík), KEF. SEEDS organises the “minibus option”, a shared transport from Reykjavík to the workcamps and vice versa, which apart from being cheaper and more convenient, allows volunteers to meet fellow campers and have a relaxed trip to the project, while stopping on the way for interesting sites.

EXTRAS: Participation fee EUR 150,- (Euros). Guided hikes around the beautiful surroundings will be arranged for SEEDS volunteers. Free access to the fitness centre, gym, sauna and hot tubs/Jacuzzis; as to the leisure time rooms with ping pong and billiard for a nice stretch after a hard working day.