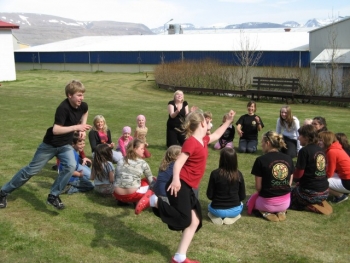 Ask for more information
From 04.08.2009 to 18.08.2009
Type: Environmental / Language
Number of volunteers: 6
Language: English - high proficiency is not required
Accomodation: Local housing in the heart of Reykjavík
Participation fee: 150 EUR
Extra: SEEDS will provide volunteers with passes to access free of charge the city\'s seven geothermal swimming pools and beach. Volunteers will have the chance to live at the northernmost capital in the world and one of the smallest!

WORK & STUDY/PROJECT: This particular project will combine a learning/study content of the Icelandic language and of work in the capital of Iceland. Volunteers wishing to gain basic knowledge of the Icelandic language and willing to discover Reykjavík and its citizens are welcome to join this project; the focus will be given to conversational/oral competences; accompanied by formal sessions on grammar and informal ones on practical situations of real life.

The group may be divided according to the Icelandic level of the participants. Formal and non-formal learning methods will be combined with a good blend of in-room sessions and in-the-city activities to practice and improve the knowledge in different situations and circumstances of daily life.

The project will be divided into two; during the morning volunteers will have the Icelandic lessons and activities with an experienced teacher; while in the afternoon the group will be working on various different projects with the city of Reykjavík, in the public and outdoors areas.

The lessons will be given in a language school located in the centre of the city; closely located to the accommodation place and within walking distance to all major attractions of Reykjavík. The working sites will be diverse around the city and include work at the coast-line, parks and recreational areas.

LANGUAGE: English & Icelandic will be the languages of the camp; proficiency is not required.

EXTRAS: Participation fee EUR150. SEEDS will provide volunteers with passes to access free of charge the city’s seven geothermal swimming pools and beach. Volunteers will have the chance to live at the northernmost capital in the world and one of the smallest!