There was a moment of panic during Big Fish Day in Dalvik, north Iceland, this year. A group leader in charge of taking children horseback riding was going to cancel the outing after a French volunteer told her that the horses were angry.

It took a while to realize that the volunteer, part of Iceland's SEEDS program, had trouble with the English 'h' sound. He had actually said that the horses were "hungry."

Volunteering in Iceland is for adventurous souls. But those who undertake it will certainly have enough to write home about. SEEDS,which stands for SEE beyonD borderS, is an Icelandic NGO that aims to promote "cultural understanding through work on nature-oriented, outdoors and environmental issues."

The organization was founded in 2005 by Colombians Oscar-Mauricio Uscategui and Hector Angarita and Icelander Viktor Thórisson. The organization works on environmental proiects and sends Icelanders to volunteer on assignments in other countries, as well as bringing foreign volunteers to work in Iceland. "We hosted over 160 volunteers from over 20 countries this summer," explains Uscategui.

There are projects in 15 different locations in Iceland. In 2006, groups of between eight and 20 worked on the projects for a two- to four-week period. The projects included working with the community in Sudureyri to attract more visitors to that remote corner of the Westfjords, maintaining and marking hiking paths in the popular Landmannalaugar area of the Icelandic interior, cleaning up the coastline in the eastern region of Öxarfjörður, and planting trees in Þórsmörk.

"The local communities welcome the idea," says Uscategui. "Apart from the work for the environment it is of course an intercultural experience."

Icelanders who work abroad can undertake projects like tsunami relief efforts in Asia, building hiking trails at an Italian national park and building a school in Kenya, all sponsored by grants from the Youth Program of the European Commission. But getting people to sign up is another story. "Icelanders are used to earning money from a very early age," explains Uscategui. "They like the idea of doing something different but one of the first questions is always 'How much am I going to get paid?'"

Oscar remains optimistic, however. "We know that with time, promotional work and some Icelanders taking part, we will be able to encourage more locals to volunteer abroad" 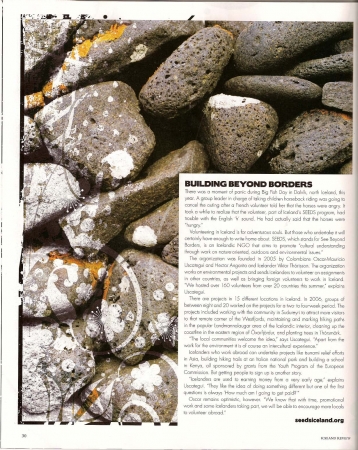