Ten Icelandic projects that just might save the planet, or this part of it anyway.

A Google search for "pure Iceland" yields 2.7 million responses. For "clean Iceland," it's 4.7 million. Iceland has very successfully - and in many cases, very rightly - marketed itself as a pure and unspoiled wilderness.

"The main reason Iceland is clean is because of the location of the island," says Bergur Sigurdsson, managing director of the Iceland Environment Association, Landvernd. "We're a small population living on a big island, which is relatively free from other polluters."

But in spite of the fact that the nation has the natural advantage of remoteness and low inhabitance -or perhaps because of it- Iceland does not have a long history of active environmentalism. The Ministry for the Environment is only 16years old. We have one of the world's highest per capita rates of energy use and waste generation. More than 80 percent of the power generated in Iceland is used to smelt aluminum.

Today, many Icelanders are waking up to the fact that in order to continue to live up to its reputation on Google and beyond, the land needs their help. Meet ten organizations working in their own way to change and improve the country. Some are big and some are small, but each is doing its part to clean the air, reduce waste, educate, or initiate policy change to make Iceland a cleaner, greener place. 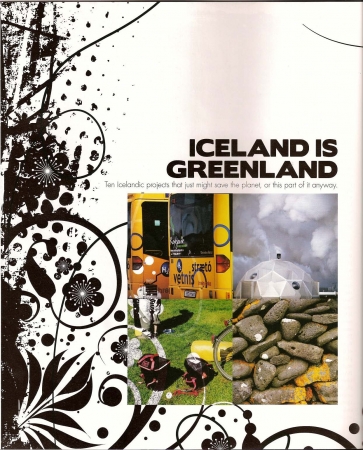