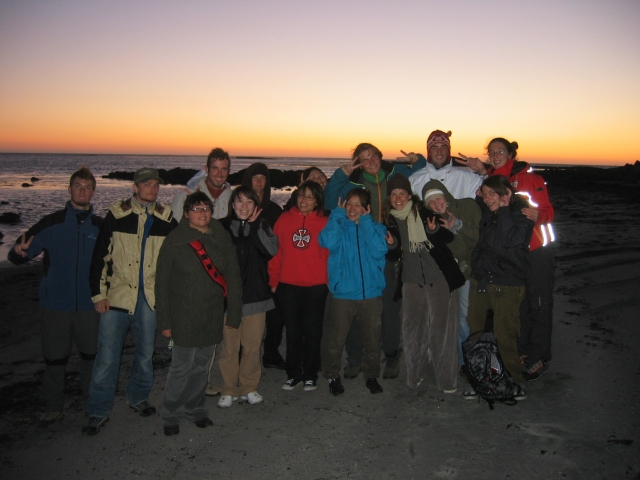 A group of 16 volunteers from Italy, Spain, Japan, Poland, Germany, France, Hungary, United States and The Netherlands have successfully ended the second SEEDS work-camp on the island of Viðey this year.

The group worked as a team from the beginning and a lot of work was done and achieved. On Viðey they painted tables, cleaned the coastline, helped with the Viðey festival, built down the Blind Pavillion (an artwork by Olafur Eliasson that needed to be moved to a different location) and last but not least a huge Viking ship was build out of the trash of the work-camp in the frame of the "Beauty and the Beast" contest organised by SEEDS in Iceland and coordinated by UNESCO at global level.

Led by the group’s Environmental Messenger, Lara Marx and the help of the leader Letizia Bottoli, they are one of SEEDS groups of volunteers creating additional entries for the competition for groups of volunteers throughout Europe to show that waste can be re-used (and be beautiful).

The artwork will find a new home at the UNESCO headquarters in Paris. What used to be local garbage will become international art - alongside artworks from similar projects.

The project is a part of UNESCO’s Decade of Education for Sustainable Development (www.unesco.org). The project is organised by SEEDS (www.seedsiceland.org), which cooperates with CCIVS, the Coordinating Committee for International Voluntary Service at UNESCO (www.unesco.org/ccivs). This is part of SEEDS' work to use volunteer exchanges to preserve the environment and create peace and mutual understanding.

Besides the work on Viðey, the volunteers assisted in the Reykjavík Marathon and the Cultural night because the other work-camp of SEEDS in the city could use some extra hands. At the end, for two days they helped preparing a festival in Sandgerði.

On the campaign "Beauty and the Beast" visit http://www.unesco.org/ccivs/New-SiteCCSVI/CcivsOther/esd/ESD2007.htm

On Sandgerði, go to http://www.sandgerdi.is

On the Reykjavík Marathon, visit http://www.marathon.is

The work of our volunteers in these places: