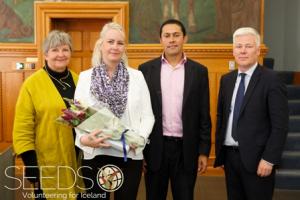 Yesterday was a great day for SEEDS and the coastline of eastern part of Westfjords. Landsbankinn awarded SEEDS a grant to clean the coastline of the eastern part of the Westfjords in cooperation with the land owners. SEEDS and the municipality have agreed on the project and now it can take place thanks to Samfélagssjóður Landsbankans (Landsbankins Community Fund/Social responsibility fund).


The coastline is part of the Kaldrananeshreppur municipality. Drangsnes the town of the municipality has about 73 inhabitants and got its name from a rock. The story says that the Westfjords were nearly separated from Iceland by three relentless trolls, furiously digging the Westfjords away from the mainland. One troll woman, called Kerling, competing against her conspirators realized that her task would not be accomplished and slammed her shovel down in a rage, breaking off a chunk of land, thus forming Grimsey, on Steingrimsfjordur bay. Though the trolls were unsuccessful in breaking off the Westfjords, the choppy coastline of Drangsnes at the far end of Steingrimsfjorður bears marks of the troll woman’s handiwork. Her grim profile, transformed into stone by the first rays of sunlight, now watches over Grimsey.


The projects aim is to clear as much area as possible off the coast of Steingrimsfjardar bay and Drangsnes. The Westfjords have a lot of untouched nature that need to be considered, it requires the cooperation of many for the projects. Conservation and awareness is vital for the planet, for our quality of life and future. Iceland is an ideal country to teach our neighbors and colleagues from other countries how to maintain and strengthen the nature of human behavior and the calibration within communities.