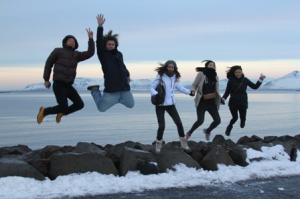 In the beginning of January participants from France, Japan, Korea, Colombia, Russia and UK took part in the workcamp SEEDS 002. Environmentally aware in Reykjavík. They participated in various sessions; they learnt more about recycling in their houses, environment in Iceland and other countries, they studied the topic of whale protection.

The volunteers collected more than 120 signatures against whaling in Iceland for IFAW and took part in the workshop organized by them. They were very active and involved in discussions during 'Environmental campaigns' session – they prepared their own PR campaigns and analyzed posters.

The volunteers found new friends and made an integrated group which one could see during the international dinner and the 'evening of countries'. They enjoyed two excursions, Golden Circle and Blue Lagoon very much. During free time they watched movies, listened to concerts of local bands and played games. The group had even "the dish of the project" – they put mayonnaise to everything! Although, it had a big enemy – the Icelandic hot-dogs are as tasty as mayonnaise ;).